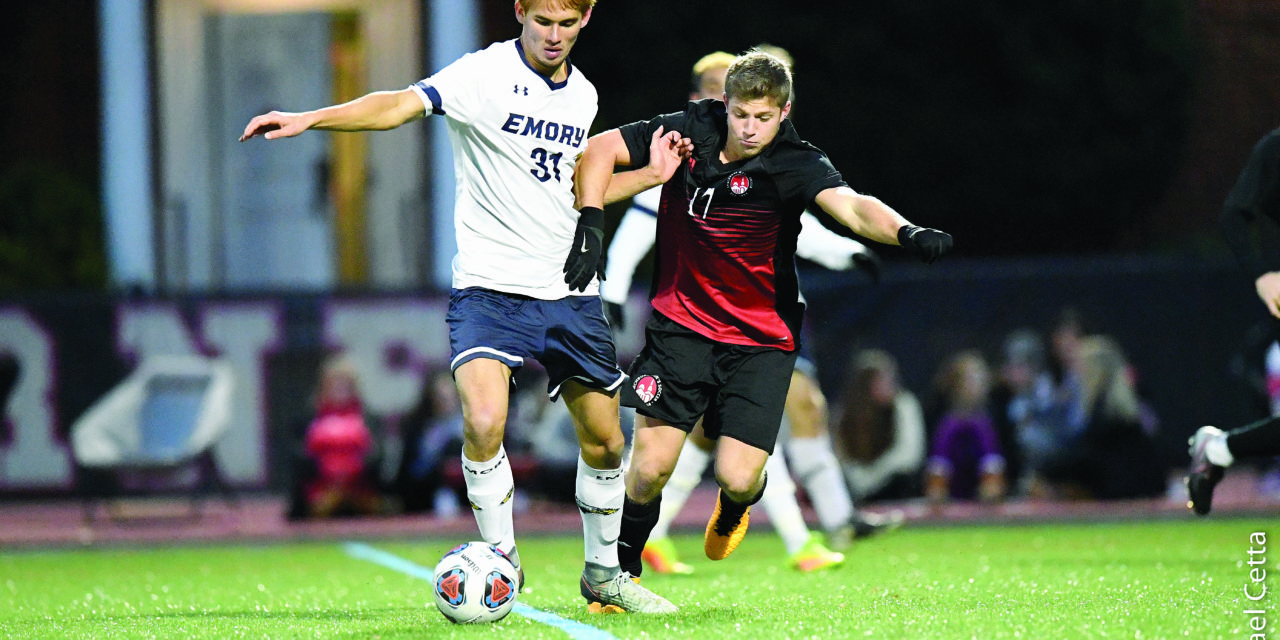 Senior forward Jason McCartney fends off a defender in the Eagles’ second round victory over Lynchburg College (Va.) Nov. 12. Courtesy of Michael Cetta.

The Emory men’s soccer team extended their season with a playoff push in the NCAA Tournament after elimination-game wins in the first and second rounds of the NCAA Division III Tournament. The Eagles bested Dickinson College (Pa.) 3-1 in the opening round Nov. 11, before defeating Lynchburg College (Va.) 1-0 in the second round Nov. 12.

With the two victories, the Eagles advance to the Round of 16, tying with the best postseason performance in Emory history.

In their first round matchup against the Dickinson Red Devils, Emory started the game with an offensive flurry, scoring three goals in the first 34 minutes of play.

Seven minutes later the Eagles broke through with senior midfielder Jason McCartney’s first tally of the night. With his back facing the goal, McCartney received a cross from junior defender Aidan Datene from the left flank. McCartney, with little room to work, spun left to fool the defender and hit a low left-footed shot that nailed the right post and ricocheted back into the goal.

In the 22nd minute, after a poor kick from Meagher, senior forward Christian Meyer took possession and dribbled past multiple Dickinson defenders. Moving left outside the box, Meyer rocketed a perfect left-footed shot that went right-upper 90 and left Meagher frozen between the posts.

“On my goal, I just saw some space and took it,” Meyer said. “No one on Dickinson stepped to me until I was at the top of the box, and I ended up hitting a pretty good shot.”

The early scoring didn’t end there for the Eagles. In the 33rd minute, sophomore midfielder Jun Tsuru ripped a long-range attempt that was deflected by a Red Devil defender. However, the deflection fell to McCartney who, after the original offside ruling was overturned by the head referee, notched his second goal of the night.

But the Eagles’ defense dominated most of the second half, highlighted by freshman goalkeeper Cole Gallagher and sophomore midfielder William Jones.

In the 48th minute, Red Devil senior forward Will Bracken seemed to have an easy goal-scoring opportunity with no defenders around him, but Gallagher blocked his opportunity with an amazing diving save to his right.

The Red Devils had another opportunity in the 84th minute. Red Devil freshman forward Mohamed Kourouma directed a header that seemed destined for the back net. But Jones, standing back post, turned the ball away with his left foot before crashing into the net.

With the final whistle, the Eagles claimed a 3-1 victory, setting up a second round matchup against the No. 15 Lynchburg Hornets (18-2-2).

Sporting a 16-match unbeaten streak, the Lynchburg Hornets hoped to utilize their home-field advantage and continue their winning stretch.

In the first half, the Hornets looked prime to score with four shots on frame, but Gallagher provided multiple saves to prevent any damage.

Emory, on the other hand, lacked shots on target in the first half. They only had one attempt on target by junior midfielder Evan Floersch, whose headed effort was saved by Lynchburg junior goalkeeper Dylan McLaurin. Overall, Emory had only 10 shots to Lynchburg’s 20.

Nonetheless, the stalemate held until the 72nd minute when Khattab provided the spark that ignited Emory’s run to the Round of 16. His shot from the corner of the 18-yard box went far post and into the net, handing Emory the 1-0 lead and their ticket to the Sweet 16.

“Khattab’s goal was amazing,” junior defender Tyler Santee said. “I didn’t have a good angle on it, but I knew before it hit the back of the net that it was in.”

With Emory leading 1-0, Khattab had another chance in the 75th minute with a free kick from 30 yards out, but McLaurin’s acrobatic save prevented an additional goal.

For the Eagles, one goal was enough. The defense recorded its sixth shutout of the season and Gallagher saved four shots, earning his sixth clean sheet. This marked only the second time this season that Lynchburg failed to score a goal, the only other occasion coming in a 0-0 draw against Virginia Wesleyan University Oct. 24.

“Lynchburg was a very tough opponent, which was to be expected, but we played our game,” Santee said. “We weathered the storm defensively and took advantage of our opportunities on the attacking end. The last 20 or so minutes were about as hectic as we’ve played all year, but we kept the ball out of our own net and we are on our way to making history. I think that is the most exciting part of this whole experience, knowing that we have the opportunity to put our names in the record books and make a statement that our program is not to be overlooked.”

Despite making Emory history, the Eagles are not ready to settle.

“Making the final 16 is a great feeling, and we know we’ve now equaled the best season in Emory history,” Meyer said. “We’re not done yet, however, and are already looking forward to next weekend and Mary-Hardin Baylor, our next opponent.”

After their historic weekend, the Eagles advance to play the University of Mary Hardin-Baylor (Texas) (19-2-1) Nov. 17 in Chicago with a trip to the quarterfinals on the line.