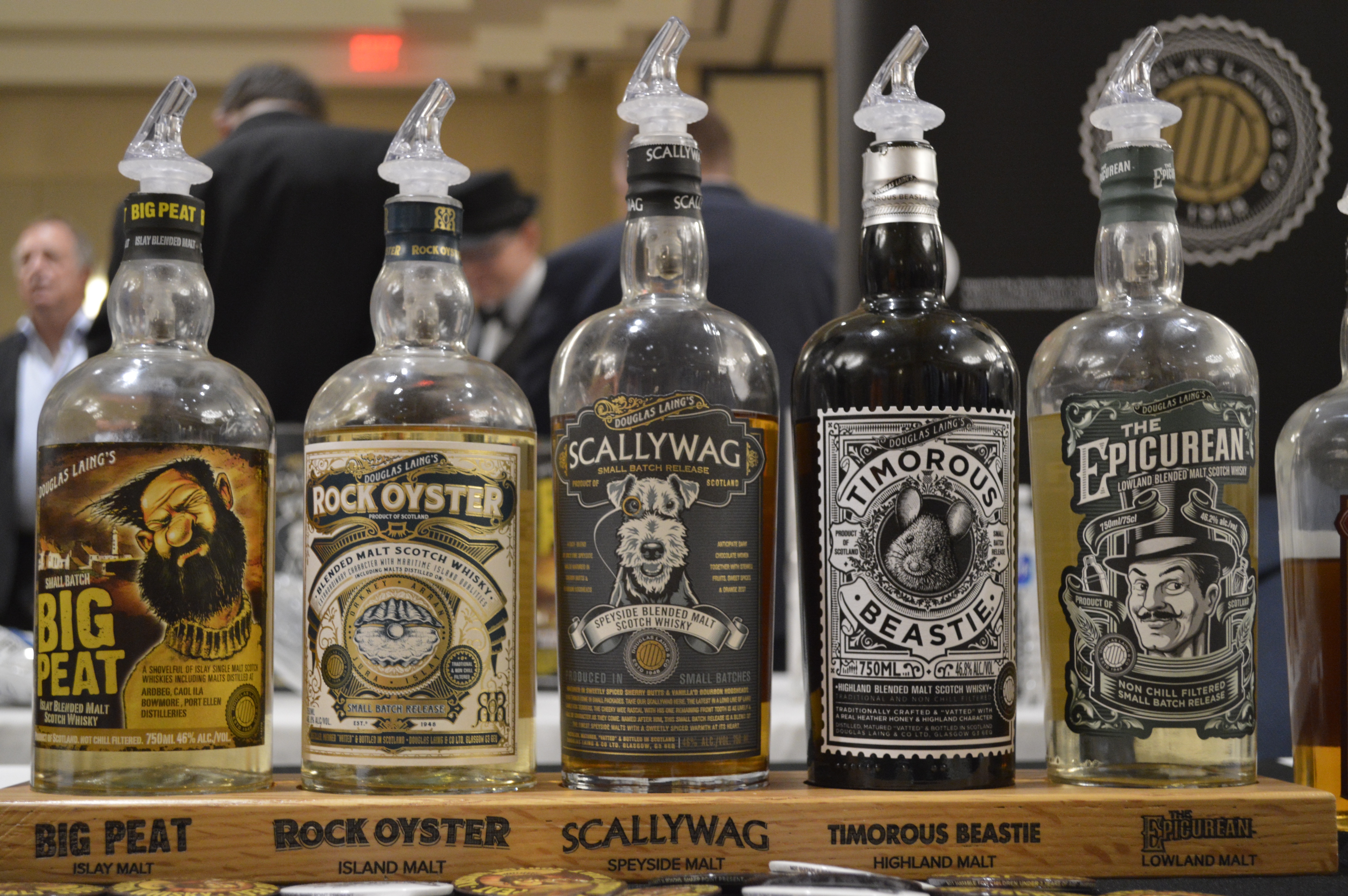 Whiskies of the World offered unlimited samples of around 200 different whiskies from more than 40 different. Tickets were $120 a pop with donations made towards North Atlanta Rotary Club. (Hayley Silverstein/Managing Editor)

When Atlanta native Mike Ivey invited his friend Rob Stites to Whiskies of the World in Atlanta, Stites said yes. That’s just what you do in such a scenario.

“My wife and I planned this sh*t six months ago,” said Ivey, a Whiskies of the World attendee. “Then she wakes up and is puking her guts out all night and can’t come. [I called Stites and said,] ‘Do you wanna go drink all of the whiskey that you can drink for four hours?’ And he said, ‘Yeah, that sounds like a good idea.’”

Thus, when Managing Editor Hayley Silverstein (18C) and I were presented with the opportunity to attend Whiskies of the World, disregarding our complete and utter lack of knowledge of whiskey, we naturally said yes. That’s just what you do.

I soon realized that a whiskey tasting is a bit like visiting a brewery. Simply add beers from around 40 other breweries, swap the beer with whiskey, add a pasta dinner, dress everyone in suits and dresses, then stick it all in a fancy hotel ballroom. Welcome to Whiskies of the World.

For one whiskey-ful evening, guests at Whiskies of the World enjoyed unlimited samples from more than 40 distilleries, boasting a total of more than 200 unique whiskies. The event emailed pre-event instructions to guests, strongly suggesting that participants arrive hydrated and consider spitting out some of each sample in the designated containers in order to extend the tasting experience. General admission tickets sold for $120 a pop and included unlimited samples, a glass to keep and dinner. A portion of the proceeds benefited the North Atlanta Rotary Club.

Beyond the assumption that I would be consuming a decent amount of alcohol, I had little idea what to expect. What I discovered was that the event, hosted at The Westin in Buckhead, Ga., Nov. 4, offered not only an eclectic mix of whiskies but of ambience as well.

The ballroom was packed full of booths, each hosting a different distillery. Brand ambassadors stood behind each booth, describing the offerings and making recommendations based on preferences of flavor, smoothness, peat and much more.

With the general dress code and ballroom setting, the event was, in part, professional. Nevertheless, both visitors and distillery representatives were by no means unapproachable and certainly unpretentious. (With our lack of whiskey knowledge, this was a reasonable concern.) Representatives eagerly shared details of their whiskey and answered even the most basic of questions. Though this event was what Ron Burgundy might describe as “classy,” all attendees were clearly having a good time and weren’t ashamed to show it.

The email sent prior to the event also encouraged attendees to dress up, “especially wearing kilts, dinner jackets and party dresses.” Silverstein and I unfortunately did not witness as many kilts as we had hoped, but there were a few whiskey traditionalists sporting kilts and tube socks in honor of the drink’s strong Scottish roots. Among these select few was Ivey, who came fully prepared in a kilt and tube socks with the word “WHISKEY” in large, stitched letters on each leg. 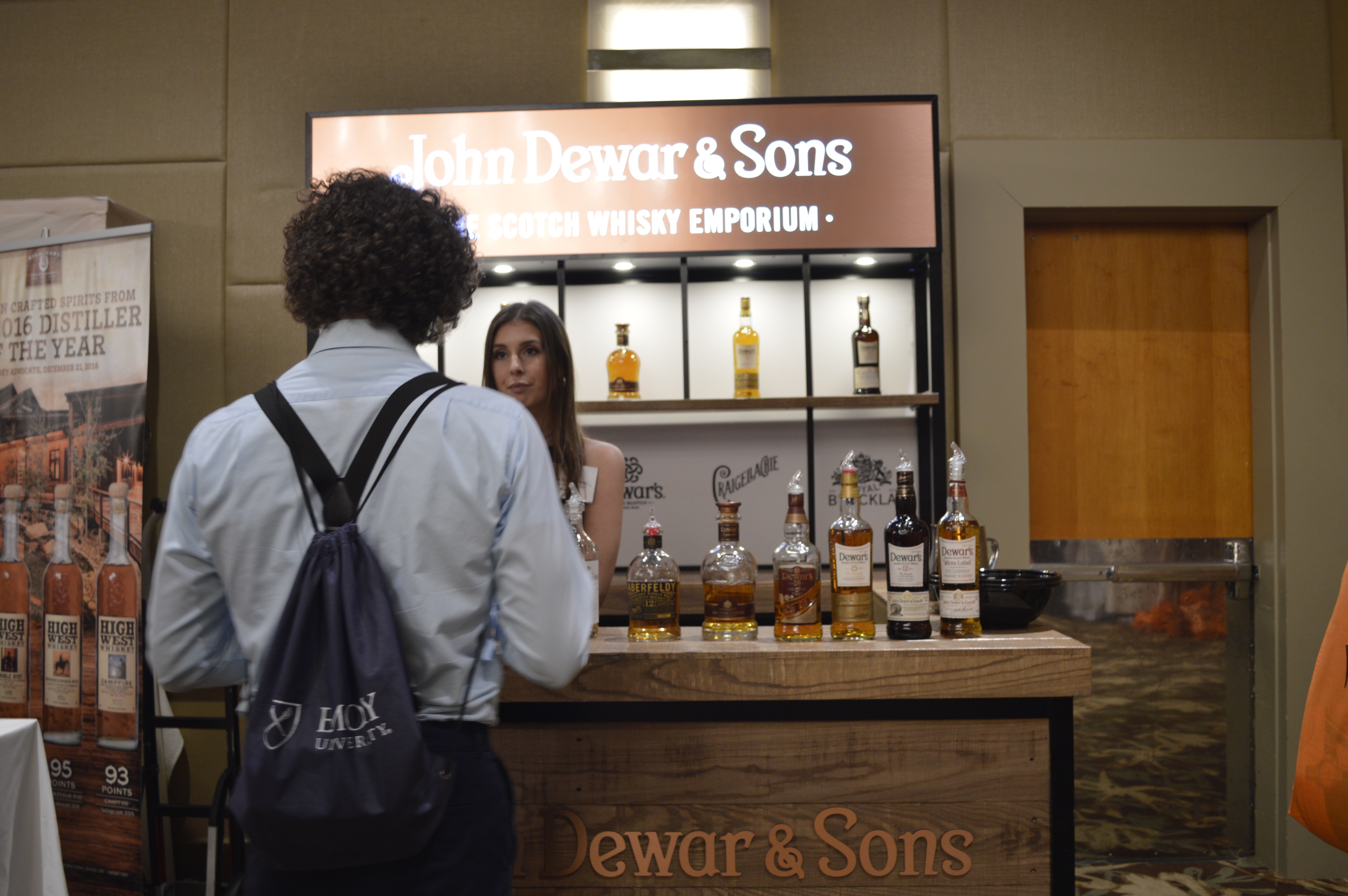 Over the course of the event, Silverstein and I sampled whiskies from nearly 20 different distilleries. Recalling that Glen McKenna was the name of the famed whiskey in “How I Met Your Mother,” we were careful to to sample each of the distilleries with the name “Glen,” since, obviously, they would be the most exclusive. (We learned after some time that glen apparently means “valley” in Gaelic.) We concluded that The Glenlivet, Belle Meade Bourbon and Breckenridge Distillery were among our favorite brands, though if you asked us why, we probably couldn’t provide a very scientific rationale. To round it out, we would be remiss if we didn’t admit our continued appreciation for Jack Daniel’s Tennessee Honey, though we likely wouldn’t want to fully admit so in front of the likes of Ivey.

For whiskey novices such as myself, the event was an excellent learning opportunity. I expanded my knowledge of distilleries and got a taste for the depth of the whiskey industry. Some of the more unique tastes included Amador Double Barrel Bourbon, which ages first in whiskey barrels before finishing out its life in wine barrels; John Drew Brands, which offers a drink called Dove Tale Rum that ages rum in bourbon barrels; and Dalton Distillery’s TazaRay, which originated in Georgia when the owner used sunflower seeds to create a gluten-free whiskey for his son with celiac disease.

North Atlanta Rotary Club members and volunteers also attended, staffed and coordinated the event. Club Service Chair Nathan Aberson explained that the club does all it can to ensure the event is a success.

“This is a fundraiser for the club, and the money that we raise goes to our charitable work in the community,” Aberson said. “The first year we did this we were nervous about what this crowd would be like … but when you come here it is really upscale and it is really a nice event, and I think everyone has a great time.”

The North Atlanta Rotary Club is an international service organization which currently focuses on the eradication of polio, with recent cases found in only three countries across the globe, according to Aberson. The club also works locally in supporting student literacy, numerous homeless shelters and the Georgia Rotary Student Program at Oglethorpe University (Ga.).

Whether you are a whiskey fanatic or novice is of little importance at Whiskies of the World. Anyone with a heart for whiskey is sure to find one (if not dozens) of tempting new options. Just be sure to take small sips.