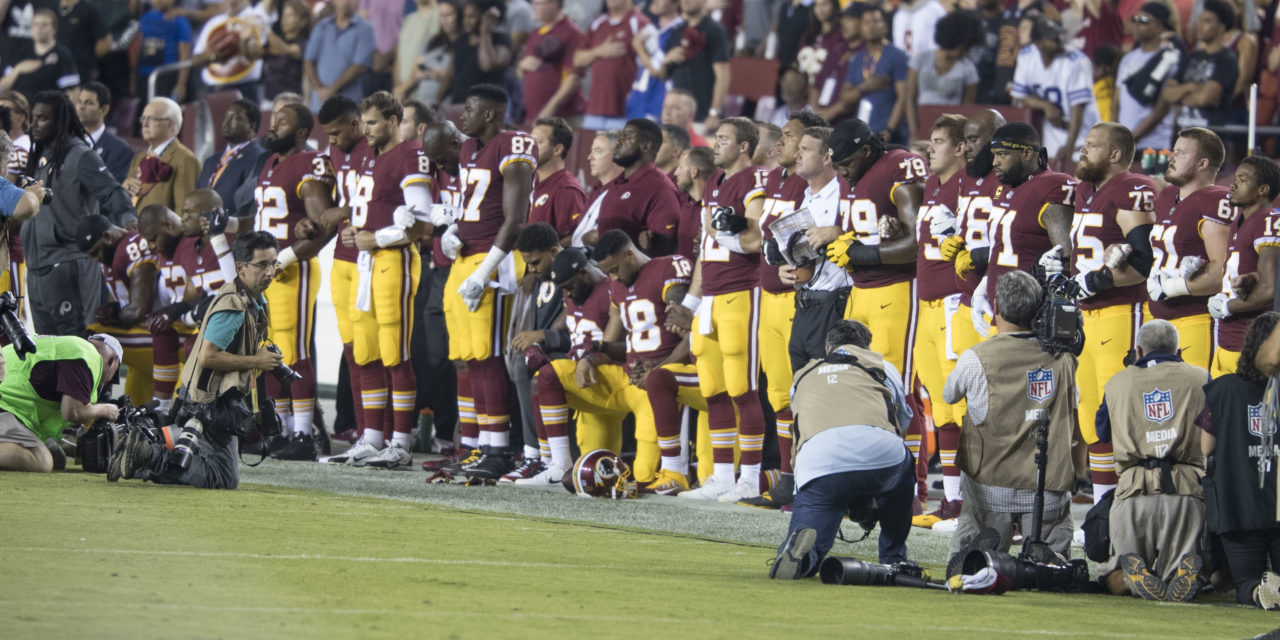 Players kneel prior to a game between the Washington Redskins and Oakland Raiders Sept. 24. Photo courtesy of Keith Allison.

The saga of the NFL player protests extends further into the abyss. In the most recent development surrounding former NFL quarterback Colin Kaepernick and the resulting police brutality protests, several individuals, including NFL owners Jerry Jones and Robert Kraft, will be deposed by Kaepernick’s lawyers and asked to turn in their cell phone and email records regarding allegations that the league blackballed Kaepernick, according to The Washington Post.

The request for deposition is simply the latest in a long line of happenings surrounding NFL player protests, started by Kaepernick kneeling during the national anthem, and the resulting pushback from various NFL owners. With player-owner mistrust growing across the league, a resolution to this complex conflict seems only to stretch further and further out of reach.

The rocky road between some NFL players and owners has resulted in several arguments, which will likely continue to until a resolution is reached.

According to a USA Today report, some owners view the protests as business losses, with overall viewership falling to 10 percent since the season began. Television ratings this NFL season have been at their lowest in a few years. During the first three weeks of the 2016 season, 17.6 million people tuned in to watch games, but only 15.8 million have done so during the same time span in 2017. Some owners suggest that anthem protests are to blame, but there is little concrete evidence to support this claim. Some viewers have turned away from the NFL in solidarity with Kaepernick, though others have tuned out due to moral reasons concerning player safety in light of evidence that the hits football players endure each game can cause severe, long-term health effects.

Players involved in the anthem protests see the demonstrations as a way to bring awareness to racial problems in the United States. With players showing support for Kaepernick, and owners like Jones threatening to suspend players who protest, the relationship between NFL executives, owners and players is reaching dangerously high-levels of instability. With Kaepernick’s legal battle looming, it’s likely that owner-player relations will only grow worse in the interim.

In an Oct. 17 meeting, NFL owners met with players to find common ground on the issue of kneeling during the National Anthem. League executives attempted to acknowledge that they understood the social justice issues driving players’ protests, and it appeared that plans were in place to reach a mutual understanding about the protests.

However, just one day following this reportedly productive meeting, Houston Texans owner Robert McNair made the comment that “We can’t have the inmates running the prison” in regards to player protests, according to an ESPN Outside the Lines report.

“Showing true colors allows [people] to see you for who you are,” Seattle Seahawks cornerback Richard Sherman wrote in a series of tweets Oct. 27. “I wish more [people] would do that. So the world could ostracize those who don’t want to see EQUALITY. Otherwise they will continue to hide.”

McNair later apologized and attempted to clarify the true intentions of his remark.

“I regret that I used that expression,” McNair said in an Oct. 27 Houston Texans press release. “I never meant to offend anyone and I was not referring to our players. I used a figure of speech that was never intended to be taken literally. I was referring to the relationship between the league office and team owners and how they have been making significant strategic decisions affecting our league without adequate input from ownership over the past few years.”

However, some Texans players were not satisfied with McNair’s response and planned to walk out of practice Oct. 27. Ten players left, but most of them returned after the coaching staff persuaded them to come back. Star wide receiver DeAndre Hopkins did not.

“I think the comments were disrespectful, I think it was ignorant, I think it was embarrassing,” former tackle Duane Brown said, according to The Washington Post. “I think it angered a lot of players, including myself.”

McNair met with Texans players Oct. 29 to apologize. However, the apology did not stop the majority of Houston’s team from kneeling during the anthem at a game later that day. The demonstration at the Texans’ Oct. 29 game against the Seattle Seahawks was part of the continued protests against police brutality with the added intent to defy McNair.

Not everyone reprimanded McNair for his “inmates” comment. A few sportscasters defended him, including Fox Sports Radio broadcaster Doug Gottlieb.

“The inmates can’t run the asylum, the prison, the football team,” Gottlieb said. “And if you’re bothered by the use of the word inmates, sorry, that’s a you problem. You don’t understand the expression. When you come up to speed on the expression, I’ll fill you in on the business acumen that you don’t have.”

It will take more than just a few meetings and apologies to patch the relationship between all the parties involved. It will be up to the players’ union, NFL owners and Goodell to find middle ground. News of Kaepernick’s legal plans is yet another wild card in the field, a catalyst with the potential to push player-owner relations to the edge if unleashed. For now, the story of this NFL season remains what happens off, rather than on, the playing field. 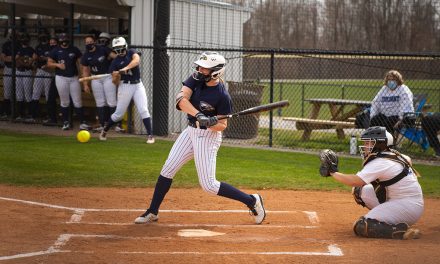