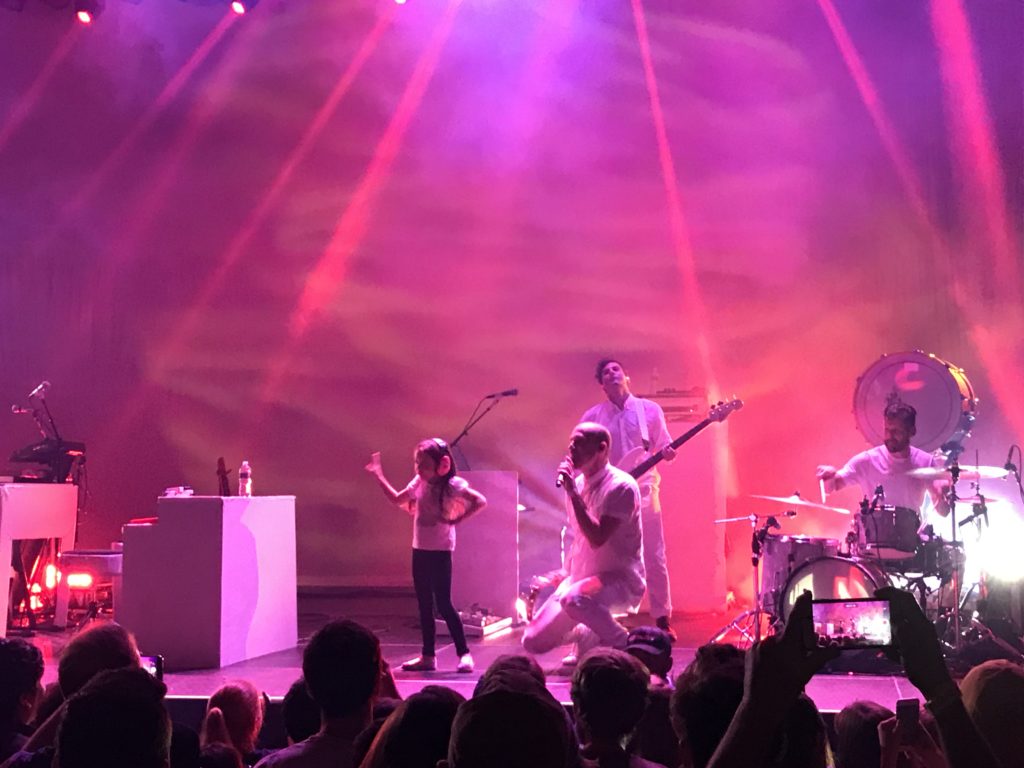 After the sudden and yet-to-be-explained departure of drummer Darren King in August, it was uncertain whether or not Mutemath would carry through with their fall tour. But thanks to the recruitment of replacement drummer David Hutchinson, the tour was given the green light.

Though King’s departure opened a wound that may never heal, that hardly mattered in Mutemath’s Oct. 2 performance at the Tabernacle. Lead singer and keyboardist Paul Meany brought his A game, along with a few friends, to Atlanta.

The show kicked into gear with a rendition of “War” off their 2017 album “Play Dead.” Showcasing the band’s strengths, from Meany’s pungent vocals to the open-ended bridges that beg for improvisation, “War” is quintessential Mutemath and a smart opener. Beginning with a back-and-forth exchange between the drums and guitar, there was no shortage of syncopated cymbal crashes to amp up the crowd. That choppiness quickly transitioned into a smooth synth melody backed by a signature Darren King hi-hat line so fluid it almost felt swung, as though Mutemath’s New Orleans roots were bursting through each stroke. King was not there to perform himself, but the style remained unmistakably his own.

What really impressed from the start, however, were the show’s visuals. A projector shot video straight onto the stage, casting a video reel that played both on and behind the performers. The entire band wore white outfits, and almost every item on stage was doused in the same color, transforming everything and everyone on stage into a projection screen. Each song brought its own visual experience: for “War,” a hazy black and white film of armed soldiers in uniform; for “Stratosphere,” a flowing pane of stars and galaxies. The projections never overpowered the music nor distracted from the performance but rather complemented the setlist to keep things fresh.

Mutemath’s setlist boasted a generous sampling of more than 20 songs, from classics like “Typical” and “Spotlight” to a helping of tracks from “Play Dead.” My only complaint was the absence of what I consider to be the best track on “Play Dead,” “Marching to the End.”

Over the years, Mutemath performances have included makeshift instruments, stage dives and raucous full-band percussion ensembles. With their 2010 album “Armistice Live” filmed at the Tabernacle, Mutemath is certainly comfortable in Atlanta. Yet, Meany still had a few tricks up his sleeve. In the band’s performance of “Monument,” Charles “LaLa” Evans, whose decision to turn his own house into a museum about his late wife Louise inspired the song, made a surprise appearance. Akin to his role in the song’s music video, Evans delighted the Atlanta audience with a dance of his own to Meany’s upbeat, soprano vocals.

During the rendition of “Pixie Oaks,” Meany’s 6 year-old daughter wandered on stage, equipped with a pair of protective headphones, and began dancing alongside her father. Just as I began to wonder if the moment could get any more adorable, she picked up the microphone and joined in on the lyrics.

With King gone, I admit I had my doubts as to whether Mutemath could live up to its performance standards. Meany is the face of the band, but King is equally irreplaceable. Tracks like “Burden” and “Reset” demonstrate King’s mastery both as a composer and as a performer. His grooves frequently achieve the perfect mix of both complexity and balance and serve as the band’s driving force without overpowering the other members. His efforts have earned him a reputation for excellence in the music industry, resulting in opportunities to collaborate with artists in various other projects, most notably Kanye West’s “Real Friends.”

What I failed to remember was the raw energy and passion that Meany brings on a nightly basis. Meany danced and sang the night away with characteristic vigor, preserving the sense of joy that pervades Mutemath performances. Hutchinson was a worthy replacement, and although the hardcore fans in attendance surely noticed the absence of King’s clean strokes and perfect ghost notes, the show did more than survive through his departure.

Since 2002, King and Meany, the band’s two founders, have stuck through thick and thin in what has at times been a revolving door of band members. Mutemath’s first and self-titled album released to large acclaim in 2006, but the band failed to duplicate that success in their four albums that followed. Touring as the opening act for Twenty One Pilots last year, Mutemath appeared on the verge of a revival, especially after the release of the two bands’ mash-up EP, “TOPxMM.” Now, though Meany has and always will be the face of the band, one has to wonder whether the project will live to see another album without King on board.

A sense of this uncertainty was palpable, particularly in their performance of “Noticed” from their self-titled album. The song included a new bridge, during which the band intertwined brief melodies from both “Odd Soul” from their album of the same name and “Monument” from “Vitals.” Meany used the bridge to thank those in attendance for their support over the years and comment on the band’s long journey. The song created an impression of unity between the three albums and a sense of closure with what had been accomplished in that time.

Mutemath’s future is up in the air, but rest assured, their shows are still downright explosive. Meany is an absolute joy on stage, and audience members can only hope to keep him up there as long as possible.