Duck Donuts is a Hole in One 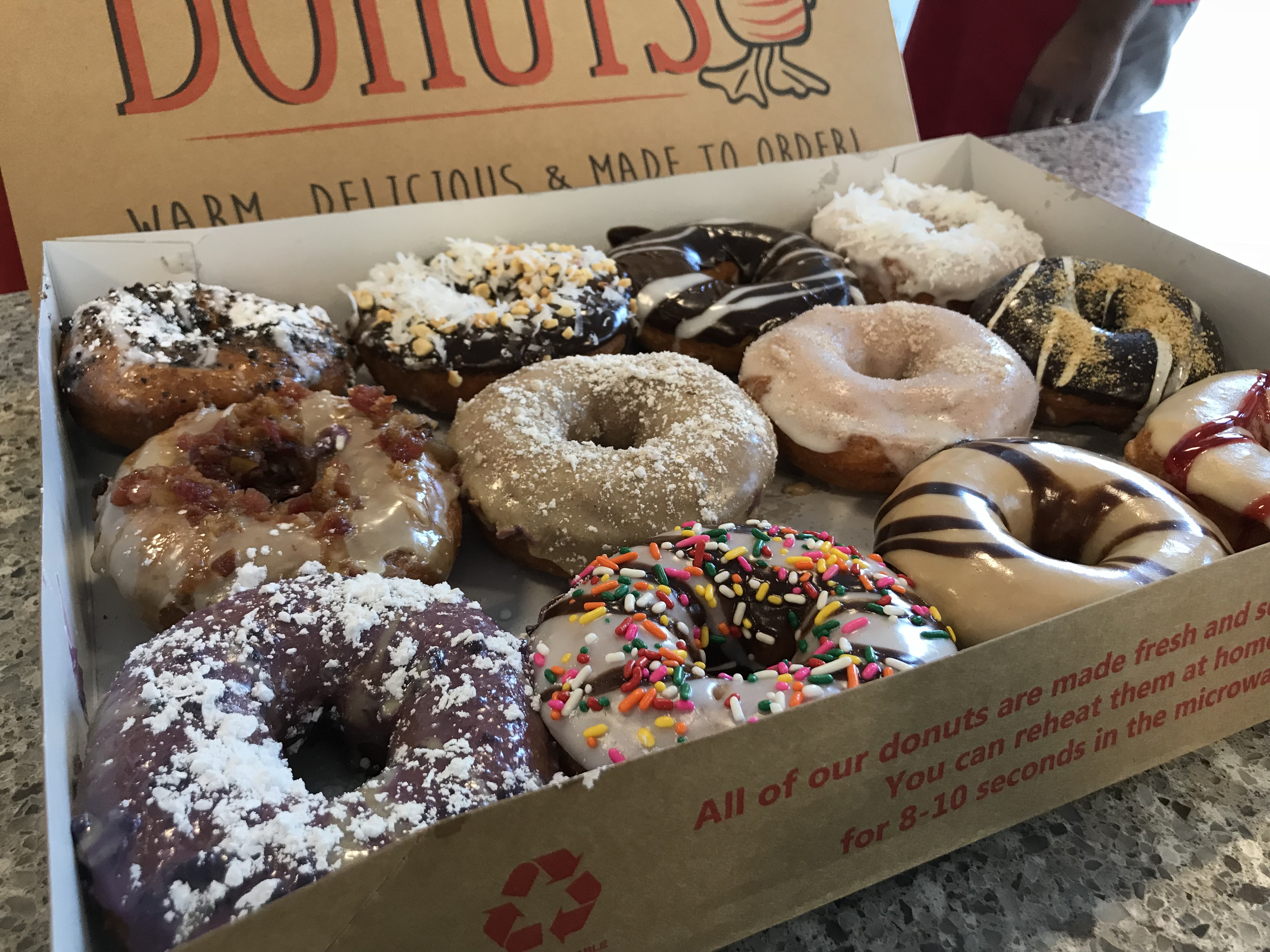 Students looking for a new DUC in their lives should look no further. Located in Tuxedo Festival retail center in Buckhead, Ga., Duck Donuts offers a warm taste of homemade donuts with seemingly endless combinations of flavors. With bright pink cabinets covered in rubber ducks beneath light blue walls, the store creates a kid-friendly aura of joyful donut eating.

When I walked into the medium-sized shop, the enthusiastic employees greeted me instantly to help me start my donut-customization journey. While its best-selling flavors are maple icing with chopped bacon, s’mores and blueberry pancake, the store also offers a build-your-own option, where you pick your desired donut flavor, coat it with frosting, top it and drizzle it with an additional flavor, like marshmallow. Unlike donuts from chains like Dunkin Donuts and Krispy Kreme, every donut at this family run shop is made fresh to order for customers.

Duck Donuts is a family business that originated in Duck, N.C., where the owner Russ DiGilio and his family noticed on vacation that “there was nowhere to get that sweet staple of happiness — a warm, fresh donut,” according to the shop’s website. After recipe sessions and months of research and collaboration, the first Duck Donuts opened in Duck in 2006. Today, Duck Donuts exists in more than 50 locations, which range from Pittsburgh to Kissimmee, Fla. The Atlanta location had its grand opening Oct. 7.

I ordered a sample of a classic donut to figure out what base I wanted, since the employees were more than willing to offer samples. I tasted the classic donut glazed with sugar and watched employees make my donut before my eyes. Scooping a spoonful of fresh dough from a bowl, I watched an employee drop the dough into a large metal contraption that fried it to a perfect crisp.

The donut was dusted in sugar on the outside with an outside crust harder than the typical Dunkin Donuts donut. The inside was similar to cake, a delicious light and airy dough that dissolved on my tongue. While the flavors of the dough were similar to other donuts, the heat radiating off of the donut and the juxtaposition between the hard shell and soft inside made it special. After I devoured what was considered the “plain” donut, I came to the conclusion that it was flavorful enough to be satisfactory alone.

I decided to order a customized donut and picked a maple donut as my base. I was tempted to go down the more adventurous path with a peanut butter or a lemon donut, but I figured simplicity was best. I picked a chocolate coating, crumbled oreos for the topping and a marshmallow drizzle. The shop offers a variety of toppings such as bacon, graham crackers and coconut shavings.

When handed my donut, I was asked if the donut “looked ok” and if I wanted anything changed. Despite the size of the franchise, the family vibe was clear. “This is our family serving your family and we want you to come back,” DiGilio said, according to the Duck Donuts website.

The maple flavor gave the donut an extra kick of sweetness. The chocolate frosting tasted rich, much like a Ghirardelli drizzle. The marshmallow drizzle did not add much to the overall flavor besides another layer of sugar but made for a great instagram aesthetic. The oreo crumbs gave the donut a crunch to complement the creamy frosting, and within minutes my donut was gone.

Overall, for a franchise that felt much more hospitable than any other dessert shop I’ve been to, a $1.45 donut was worth it. The made-to-order aspect truly produces high-quality donuts, and having control over the topping selection allowed me to mix and match flavors that usually would never be paired together.