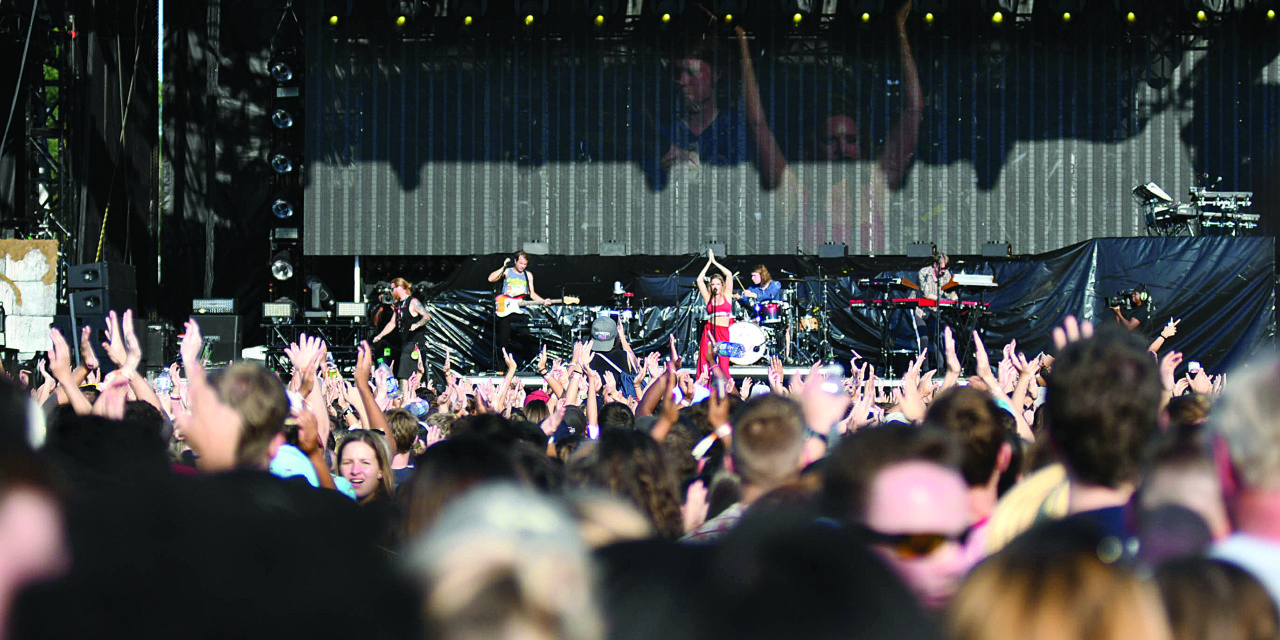 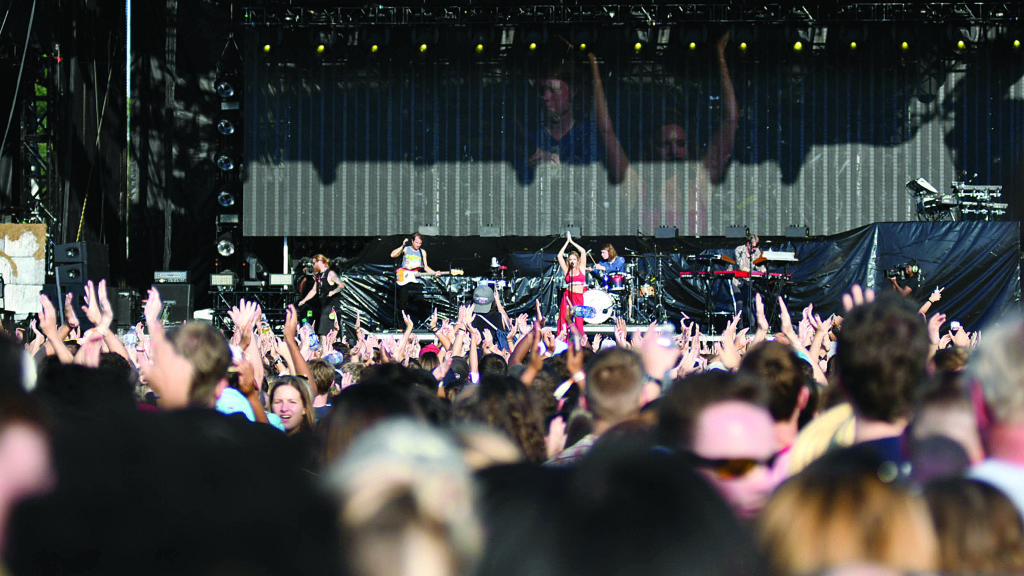 Since 1994, barring a six-year hiatus from 2005 to 2011, music lovers flock from all corners of the country to attend one of the South’s largest music festivals: Music Midtown.

This year, Atlanta’s Piedmont Park was transformed from a placid city park to a colorful fairground — booths scattered across the hills of the sprawling park sold balloons in every shade of the rainbow and glow sticks as large as light sabers. The ferris wheel’s glow up on the hill cast a multicolored wash of light against the soaring Atlanta skyline, as more than 70,000 people waited to watch 36 artists and bands of varying genres perform on four massive stages.

Following an afternoon of performances by smaller bands and artists, such as Sunflower Bean and Bibi Bourelly, Swedish pop sensation Tove Lo took to the Salesforce stage. She spent the vast majority of her performance singing songs from her most recent album, “Lady Wood.” Tove Lo’s scarlet two-piece jumpsuit, white sunglasses and nose ring fit in perfectly with her fans’ crop tops and cat ears, but the singer’s connection with the audience was more than skin-deep. The intensity with which she sang about lost love, desire and drug addiction made for an engrossing performance. Because it was a crowd of 20-somethings, the loudest cheers came when Lo flashed her breasts for more than a minute during her song “Talking Body” and then again during “Keep It Simple.” The act was undoubtedly meant to titillate, but, at the same time, the performance paralleled the vulnerability and inhibition of Lo’s honest lyrics and heartfelt singing. She ended the night on a high note with the chart-topping 2014 hit “Habits (Stay High),” to which audience members sang and swayed.

Weezer played their set at the Coca-Cola Roxy stage. The ’90s band’s charm seemed to lie primarily in their nostalgic value for the 30-and-over crowd; even among ostensible fans, the band’s newest songs, from their album “Pacific Daydream,” such as “Feels Like Summer,” drew little enthusiasm. On the other hand, three of their most popular songs, “Say It Ain’t So,” “Buddy Holly” and “Beverly Hills” elicited wild jostling, hand waving and scream singing by young and old alike. The band’s showmanship could use work; lead vocalist Rivers Cuomo’s facial expression remained neutral the whole performance, and the band seemed rooted to the stage as they performed. There was something touching and old school about the concert. The crowd knew enough of the words of “Island in the Sun” to sing an entire verse unassisted, and when the band linked arms to bow at the end of the set, flashing a “W” sign with their hands, a large minority of the audience returned the gesture. This fan connection made an otherwise mediocre and substanceless performance memorable.

Wiz Khalifa’s set at the Honda stage was certainly not lacking in substance — or rather, one substance in particular. Khalifa’s pot-smoking habit is common knowledge, but it is clear that lighting up is more than a hobby or even lifestyle choice for the rapper — it’s a religion for which he is an ardent evangelist. The majority of his songs referenced weed (“Bake Sale,” “Roll Up” and “We Dem Boyz,” among others), and in between songs, he told the crowd to scream if they loved weed (they eagerly obliged), asked which parts of the crowd had the best weed and tossed huge blow-up blunts into the crowd. Khalifa was undoubtedly charismatic and seemed to be genuinely enjoying himself throughout the set, but those hoping to hear Khalifa actually rap or sing would be disappointed — his raps mostly consisted of a plethora of “yeah”s and “yo”s, with a clear backing track supporting his voice. Khalifa’s last song of the night, “Young, Wild, and Free” perfectly summarized the ethos of the concert and, apparently, his person: “So what we smoke weed? / We’re just having fun / We don’t care who sees.”

Bruno Mars topped off the night with a bombastic performance at the Salesforce stage. The multi-Grammy-award-winning artist apparently had a bigger budget than the other artists of the night — Mars performed against a backdrop of flying sparks, flames and even fireworks. The spectacle was not a ploy to cover up a lack of musical talent, however — Mars was a true triple threat as he danced, sang and strummed his guitar with unflagging energy. Choreographed dance breaks with his band and instrumental solos broke up the fast-paced performance, and Mars showcased an ability to turn on a dime from soulful and romantic (“Versace on the Floor”) to sexy and cheeky (“Chunky”). Mars concluded the night with fan-favorite “Uptown Funk.”

Sunday’s schedule followed a similar trajectory as Saturday’s — smaller bands performed in the afternoon, leaving the more popular bands to the evening.

The first band of the night was Irish indie rock band Two Door Cinema Club, which played at the Honda stage. The band seemed focused and inwardly turned as they performed songs such as “This is the Life,” “Bad Decisions” and “Are We Ready (Wreck),” so that it seemed as though the crowd was looking in on an intimate jam session rather than a public performance. The audience was fairly sparse, for a Music Midtown performance, but devoted —  they bobbed their heads and swayed throughout, giving spirited renditions of the band’s last two songs, “Sun” and “What You Know.”

HAIM’s Salesforce set started a little late, prompting a chant from the crowd in anticipation of the pop-rock band’s arrival. A collective scream arose when the three sisters finally dashed out to the stage, waving. HAIM’s crowd was easily one of the most passionate —  audience members enthusiastically sang and danced to almost all of the songs they played, from HAIM’s albums “Days Are Gone” and “Something to Tell You”; when Este Haim requested that the crowd make “totem poles” of people on one another’s shoulders, everyone from teenage boys to middle-aged mothers rose to the occasion. The band’s performance benefitted not only from the women’s smoky, soulful singing voices but also from their banter among themselves and the crowd. Este Haim, the seeming spokesperson for the band, teased that she was single and already had her “eye on three people … let’s make it 10 by the end of the night.” Their cover of Shania Twain’s “That Don’t Impress Me Much” playfully called out the night’s headliners, Mumford and Sons. The band’s energy and charisma was infectious, so the end of the set felt like it came far too soon.

Mumford and Sons closed out the night and the festival with a performance at the Salesforce stage. The British folk band started the night slowly, with the quieter, more contemplative “Snake Eyes,” gradually ramping up the intensity with fan favorites “Little Lion Man” and “Lover of the Light.” The performance felt organic, with the give and take of the bandmates seemingly effortless. Performer-audience interaction was sparse, however, and the emphasis on longer, slower songs at the beginning of the set caused the two-hour set to drag. The performance of an as-of-yet unreleased song, “Blind Leading the Blind,” and special guests HAIM joining the stage during “Awake My Soul” at around the halfway mark revived the night, leading to a rousing rendition of the crowd-pleasing “I Will Wait” and “The Wolf” at the end of the set, amid bursts of white streamers, thick smoke and strobe lights. The band ended at an early 10:15 p.m., despite requests for an encore.

After the performance, the crowd, which had already thinned as concert-goers sought to catch Ubers before prices surged, waded through piles of discarded beer cans and deflated balloons to the Exit tent. As attendees streamed out into the Midtown streets and trickled into cars, they took with them memories of the weekend. The diversity of musical genres represented, superior staging special effects and the energy and commitment of artists, bands, and fans alike ensured that Music Midtown would go down in history as not only one of the South’s largest music festivals in 2017 but also one of its best.