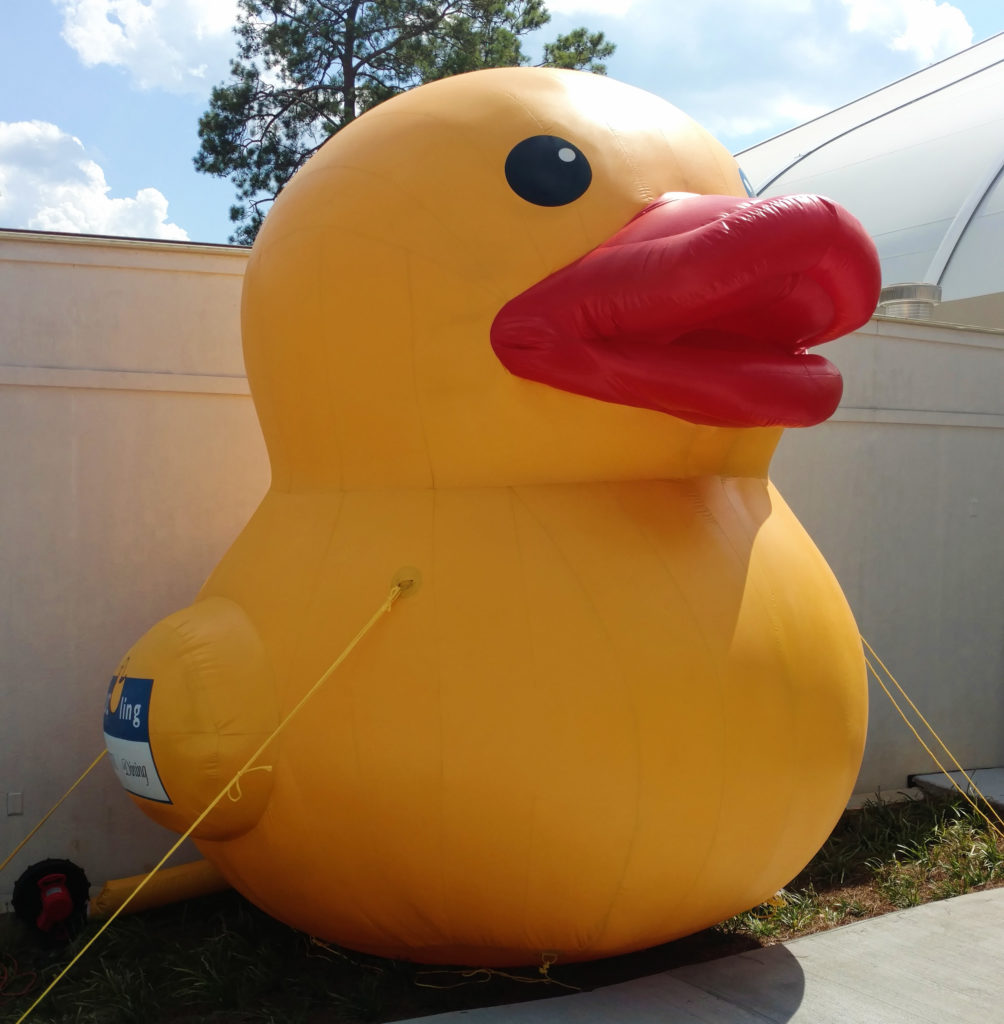 The 12-foot inflatable duck will be put up for special occasions./Richard Chess, News Editor

When Emory Dining transitioned from the Dobbs University Center (DUC) to the DUC-ling, a 12-foot inflatable duck became the star of campus during the first days of school.

“How can you see that giant duck out there and not smile?” Cafe Manager Vanessa Day asked. “It’s here to bring that positive energy and that positive vibe.”

The inflatable duck has been removed for now, but it aptly kickstarted the “duck theme” for the interim dining facility during Campus Life Center construction.

“We had this interim facility — how can we have some fun with it?” Director of Campus Dining Chad Sunstein asked. “Sometimes we don’t get the real opportunity to [have fun] in dining, and [we used this opportunity] to really play on the duck theme.”

The theme came from Bon Appetit Management Company, which Emory has contracted with to prepare meals in the DUC-ling, according to Sunstein.

The DUC-ling staff’s aprons have ducks printed on them, duck footprints line the entrance and a giant inflatable duck stands on the McDonough Field during special occasions, Day said, adding the dining staff wants to “keep the morale up” following the transition from the DUC to the DUC-ling.

The giant inflatable duck stood outside the DUC-ling on the first day of school but was deflated and moved to the McDonough Field stage because of a landscaping project that was never completed, Sunstein said.

There has been a lot of effort to reshape the culture of the dining experience at Emory, Assistant General Manager at the DUC-ling Elgin Edmonson said.

“We want [the DUC-ling] to be more than food,” Edmonson said. “Let’s bring something else. We do good food, but how long is that going to last? It’s about the environment.”

Sunstein declined to provide the cost of the duck.

Amelia Priest (20C) expressed that while the theme may be unnecessary it is a positive addition to campus.

“It’s a way to make people laugh and sort of turn the DUC-ling … into something that is funny and people want to be around,” Priest said. “People will be like ‘oh yeah, my school’s food is good, but we have this DUC-ling [and] inflatable duck.’ ”

She added that she also has some restraints about it.

“I think it’s a waste of my tuition,” Priest said. “I don’t understand the point of the duck and why it needs to be there.”

Matthew Witkin (19B) said the inflatable duck makes the DUC-ling a popular social center on campus.

“I think that [the inflatable duck] is here to try to instill that school spirit that we’ve been needing,” Witkin said. “It’s really been getting people excited about the DUC-ling and the Campus Life Center. It’s a good mascot — a third mascot.”

Some students disapprove of the duck theme. Patricia Bogdan (20C) said it is ultimately unnecessary.

“It’s kind of funny, it’s somewhat helped (with student morale), it’s good to laugh at, [but] there’s no point to it,” Bogdan said.

“I think [it took] up a lot of stage space,” Perkins said. “I don’t know if people need it, and it seems to serve no purpose.”