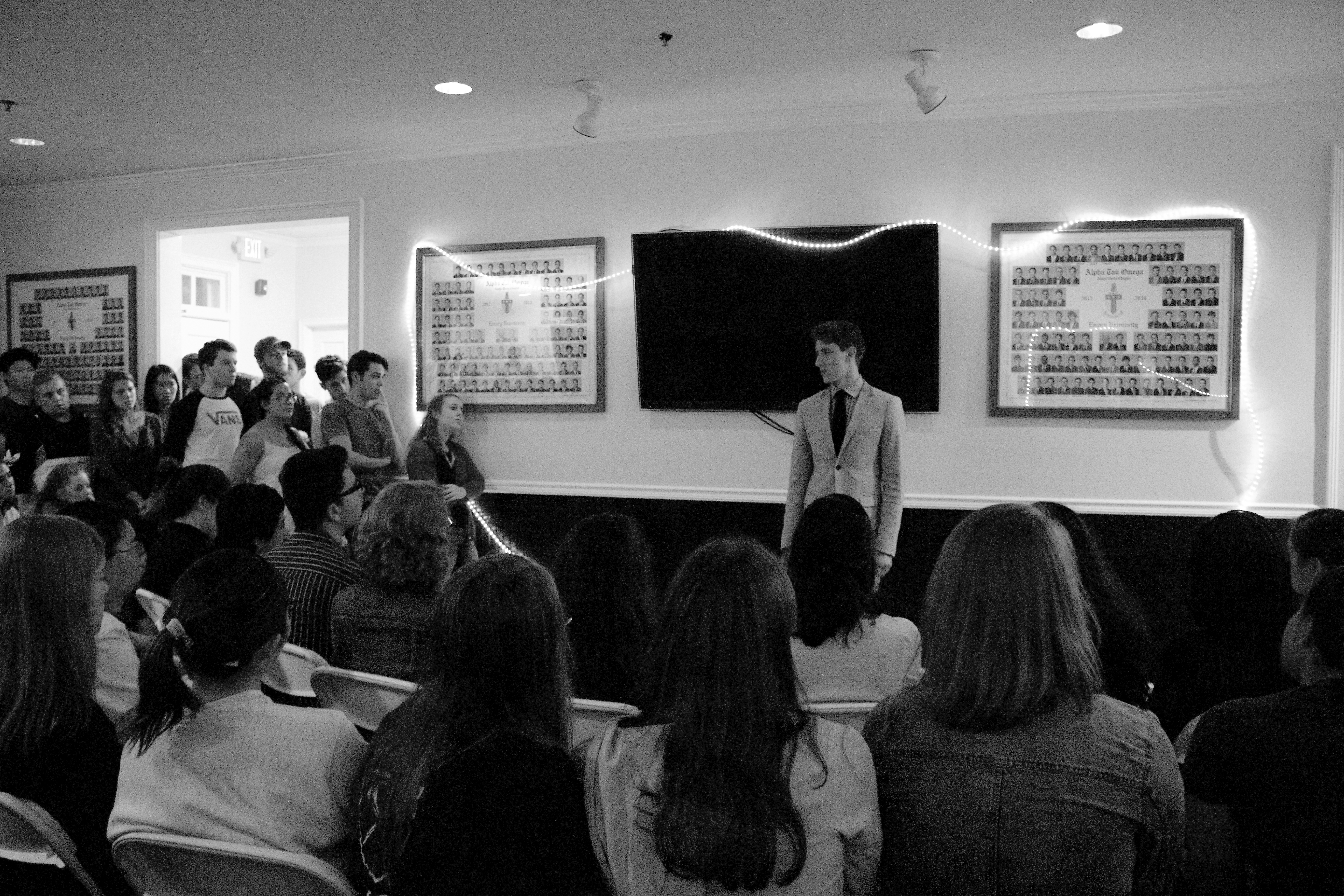 Once a year, about 200 community members swarm Eagle Row to pack themselves into a fraternity house with the intent of sharing ideas rather than partying the night away.

Six students shared intimate stories related to their passions, from being an undocumented person in the United States to environmentalism, at Alpha Tau Omega (ATO) and TEDxEmory’s fourth annual salon event, “Passion Pit,” on Sept. 7.

Matt Mach (19C), spoke about being an undocumented person in the U.S., during a time following the Trump administration’s announcement that it planned to rescind the Obama-era Deferred Action for Childhood Arrivals (DACA) program. Mach said that the phase out of DACA is “probably the biggest human tragedy in this country, at least legally and politically in the last 50 years.”

“I’m hoping that [audience members] will open themselves up a little more to the idea that human dignity and human freedom are not separated from each other, and, if you suspend the idea of human dignity, you put all human freedom in peril,” Mach said.

According to Mach, most undocumented students choose not to speak out — rightly so, because it puts them at risk. Mach said that he feels obligated to do so because he has “been given some small privileges” in his life. He has family in Poland and a safe place to return to if he was deported. Furthermore, he could continue his education in Poland.

While Mach’s speech silenced the room, with audience members glued to his words, Laura Briggs (19C) brought a lighter tone to the stage, inciting bursts of laughter from the audience with their occasional jokes. In a talk about relationships in college, Briggs refuted the “old college saying” that dating someone in college is like adding three credit hours to one’s class schedule. Briggs talked about discovering polyamory, calling it “an umbrella term for anyone whose relationship exists outside the traditional boundaries of monogamy,” and embracing it in today’s world.

Alexandra Monson (18L), the first graduate student to speak at ATO and TEDxEmory’s salon event, talked about changing her career path and deciding to attend Emory School of Law in order to study environmental law based on the negative consequences and realities of the animal agriculture industry. Monson said that 15 percent of greenhouse gases come from the animal agricultural industry.

“[In] graduate school you kind of have a more narrow focus on what you want to do and what your goal is in your career, so it was exciting to share that with others and kind of show them how I turned my passion into a career choice,” Monson said, adding that she did not have the chance to participate in “empowering” events like “Passion Pit” during her years as an undergraduate student at Villanova University (Pa.).

Similarly, Mehul Bhagat (18C) touched on how passion plays into one’s career. Speaking as the son of immigrant parents, he talked about how the work an individual pursues is a key part of who they are. Bhagat emphasized the importance of eradicating poverty in order to allow people to pursue the work they are passionate about because work is so closely tied with one’s identity.

Hallie Lonial (19C) shared her passion for swimming and teaching other people to swim, and called attention to unintentional drowning, which occurs much more often in minority groups and among those with disabilities because swimming has traditionally been a sport of privilege. Like Bhagat’s, her talk was a call for action for those who come from less fortunate backgrounds.

AHANA Dance President Catherine Messina (18C) shared her personal experience with dance and the importance of following your passion. Messina said she wanted to forgo dance because of the toll it had taken on her, mentally and emotionally, in high school — she was frustrated that something “[she] loved didn’t love [her] back.” After a summer away from dance before her freshman year, Messina didn’t receive a call back from Emory’s Dance Company. However, she decided to stick with her passion and had success with AHANA that fall.

Student Government Association (SGA) President Gurbani Singh (18B) said she was moved by multiple speeches at the event.

“Something that I just take away from Emory every day — just like normal interactions we have with people — is that everyone has such different passions,” Singh said. “It is so cool to take it all in as you’re a senior and realize this is the last time you’ll be around a bunch of people who have such different perspectives.”

According to TEDxEmory’s Director of Special Programs Robert Laxer (19C), the theme of the event changes every year. Laxer said that his hope was that the general nature of the theme would allow for a wider variety of more passionate talks this year. Laxer said the speakers were chosen through a hefty application process, which included submitting ideas, interviews and auditions. Messina said that the speakers started working on their speeches this past summer.

“[There are] important things that are being talked about tonight I think that deserve more discussion,” Laxer said. “I think that everyone should walk away having learned something and with a new idea.”