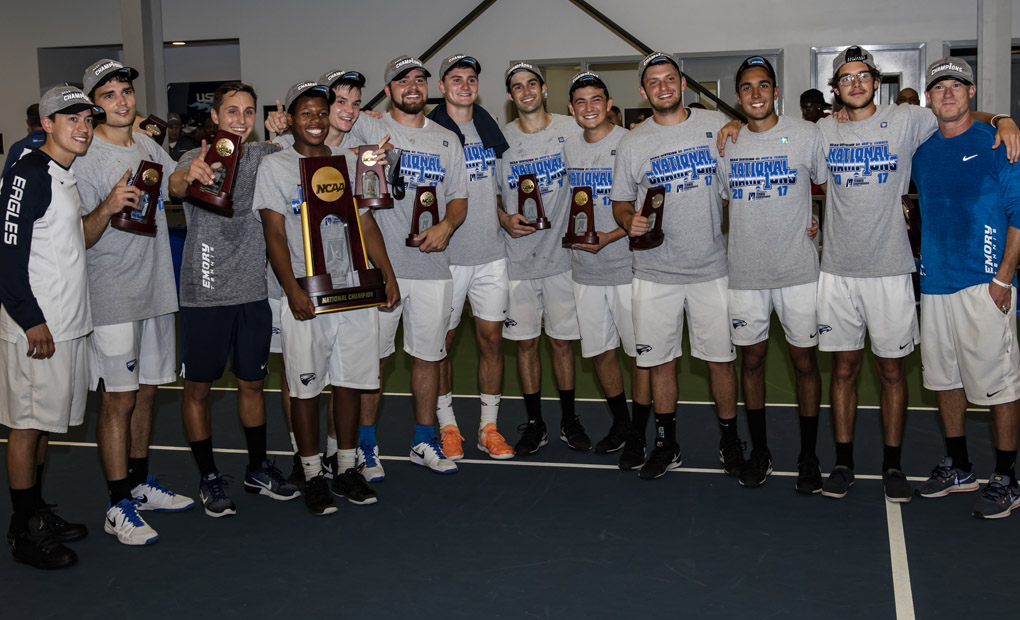 With a national title on the line, Emory’s men’s tennis team delivered a convincing 5-2 victory over Claremont-Mudd-Scripps (Calif.) May 24 at The McCallie School (Tenn.). This marks the program’s fourth national championship, its first since 2012.

The road to a championship is not an easy one. It requires five consecutive wins, the final three over three consecutive days. With victories against The University of the South (Tenn.) in the quarterfinals and Williams College (Mass.) in the tournament semifinals, Claremont-Mudd-Scripps was the final obstacle between the Eagles and championship glory.

“From the mental perspective, this is a three-day mental grind,” Head Coach John Browning said. “You are going to have emotional ups and downs, so you can’t allow yourself to start worrying about outcomes.”

Browning explained that the team mantra has been to take the journey one point at a time. It’s a mantra that’s worked: The Eagles haven’t lost a match since late March, riding a 12-match win streak into the tournament finale.

“That’s what made us so successful at the end of the year, just focusing on one match at a time and one point at a time,” Emory junior Scott Rubinstein said.

The Eagles showed no signs of slowing down May 24, jumping ahead of the competition early with a dominant performance in doubles play. After wins in second and third doubles, Rubinstein and sophomore James Spaulding gave Emory a 3-0 lead with their victory in first doubles.

Trailing 5-6, the pair turned on the afterburners to take three consecutive games, two of which broke serve, and claimed the 8-6 win.

“It was a ‘now it’s our time’ kind of moment,” Rubinstein said. “We were focused on getting that quick start and it was great to have all three doubles teams lock in and get their points.”

Emory sophomore Jonathan Jemison, who won all of his matches in tournament play prior to Wednesday’s title contest, delivered once again in second singles over Claremont-Mudd-Scripps senior Glenn Hull 7-6 (4), 6-2. Jemison’s win gave Emory a 4-2 advantage and left the Eagles just one point away from a national championship, with three matches remaining.

That final point did not come easily. Third, fourth and fifth singles all went into a third set, with neither side able to break away. Emory sophomore Adrien Bouchet finished first, holding off Claremont-Mudd-Scripps senior Daniel Morkovine 5-7, 6-2, 7-5 to clinch the national championship for the Eagles.

Bouchet forced a third set after dropping the first, but faced an uphill battle in the final set, trailing 4-5. Bouchet denied Morkovine on two match-point opportunities in that pivotal tenth game, recovering to tie the set at five all. From there, Bouchet dominated the court, claiming the next two games for a 7-5 set win.

“For [Bouchet] to be able to lock in and focus, I’ve never seen anything like it,” Browning said.

This championship is the first title for every Emory player involved.

“[This year] has been a team effort all the way up and down the lineup,” Browning said. “[The championship is] a validation for the entire team in terms of all the hard work and the effort that we have put in.”

But even with the team title in hand, the journey is not yet for over for men’s tennis. The singles and doubles individual tournaments began immediately following the team competition and will finish May 27, with Jemison and Manji in the singles competition and Rubinstein and Spaulding paired in doubles.