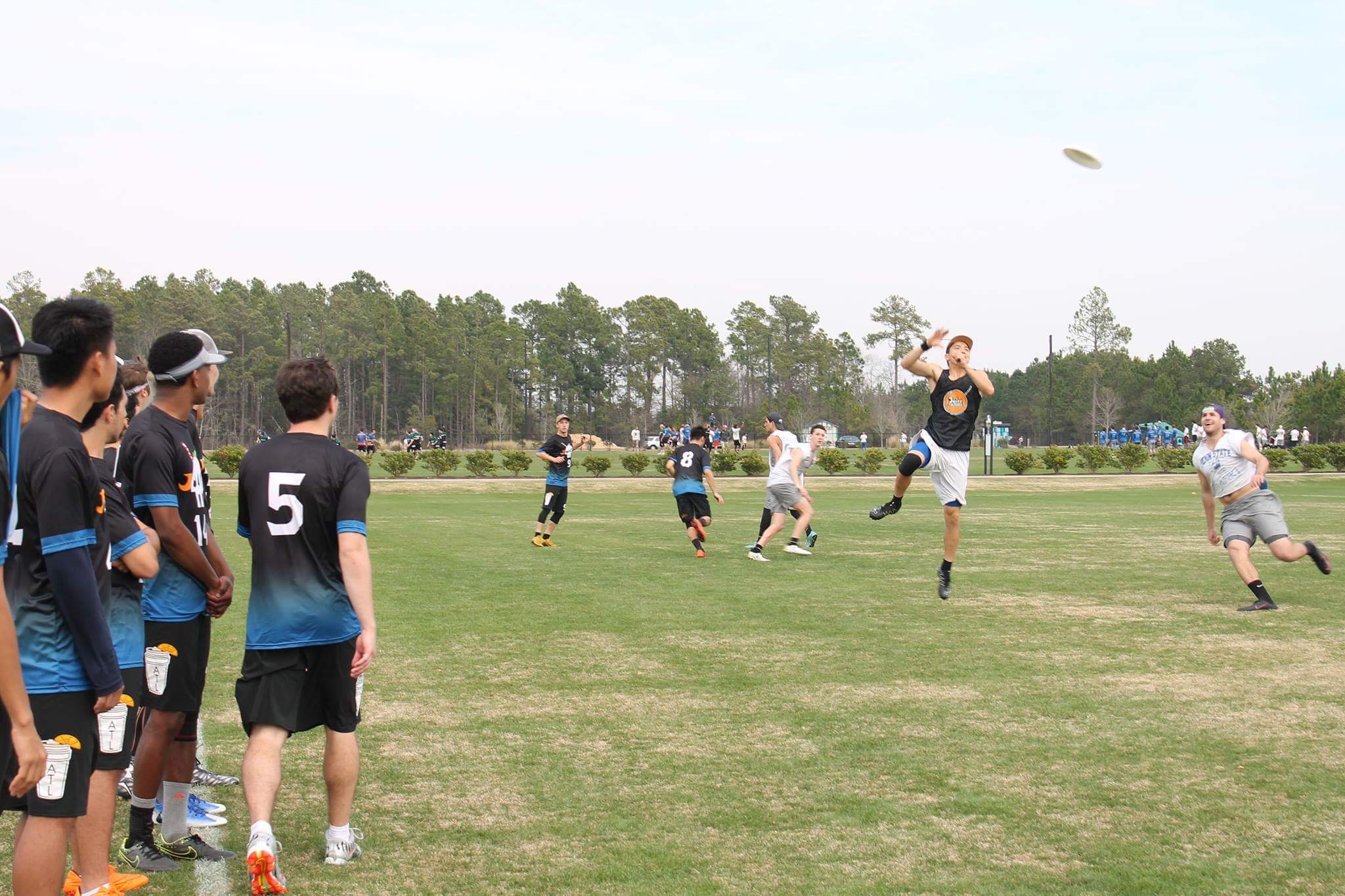 The team looks on as junior Anders Olsen leaps for the disc. Photo courtesy of Ishaan Dave.

With the Southern Appalachian DI Conference Championships approaching April 22 to 23, Emory men’s club ultimate frisbee team is preparing for the final, most important stretch of their season. A top-seven finish at the often-coined “Sectionals” competition would earn the Eagles a spot at Regionals, moving the team one step closer to Nationals.

For many team members, making it to the national competition has been the primary goal for a while, a feat the team has yet to achieve. Conquering that hurdle requires consistent improvement and development, a process the team’s leadership believes is well underway. The challenge now lies in building towards a better future, particularly as the torch is passed from the one generation of leaders to the next.

One of those leaders is senior co-captain Caleb Parsons. A captain since Spring 2015, Parsons has seen the club go through plenty of ups and downs. When Parsons joined the team as a freshman in 2014, they lacked a coach, a disadvantage they have since remedied.

“Historically, Emory [men’s club ultimate] has been looked down upon by a lot of teams,” Parsons said. “We never had a coach, but the past three years we have had Coach T.J. Martin, who is an alum from Auburn [University (Ala.)] where he used to be [the ultimate team] captain, so he knows how to build programs.”

Martin sees several of similarities between this Emory program and the team he captained at Auburn. From his first to his last year at Auburn, Martin saw a team grow from 10 to 40 athletes. The year after Martin left, the team qualified for Nationals, a prospect that he never imagined possible from the start.

“A lot of it starts with recruiting, and not only recruiting, but investing,” Martin said. “Starting out not just seeing the promise they have as players on the field but building relationships and making it more of a brotherly like atmosphere.”

Building the program begins with fortifying the team culture. That responsibility falls on team leadership, but also stems naturally from the sport itself.

The “Spirit of the Game” that Parsons refers to is featured on one of the first tabs on the USA Ultimate website. Dedicated to the sportsmanship and integrity the sport demands of its athletes, it is a set of rules and etiquette by which all ultimate players are expected to abide. It is that standard that enables ultimate to operate without referees or officials, a feat few other sports have achieved.

Ultimate culture is defined by the community it supports. For some time, ultimate lay on the fringes of the sporting world, either unknown or unaccepted. That outsider status helped build a strong rapport of acceptance and warmth among players, not only within teams but between them as well.

“I really enjoyed the company of everyone I played with in high school; then I came here [to Emory] and experienced a similar thing,” junior co-captain Ishaan Dave said. “Everyone was having a good time, giving high fives. It’s a fun sport — it’s goofy, it’s silly, it’s weird.”

Ultimate culture is what brought many of the team’s current members to the sport, but the team is hoping to strengthen that with another value of its own: discipline.

The Sectionals meet this coming weekend serves as a qualifier for the regional competition, with Emory opening play April 22 with a game against University of Georgia. That’s a matchup that will bring back fond memories for junior Anders Olsen.

“[My] freshman year, we beat [Georgia], which is known as being one of the top 10 teams in the country,” Olsen said. “It showed that Emory had the ability to compete at a high level and it inspired me when I was young to see where this team could go.”

According to Parsons, men’s club ultimate has been on Emory’s campus since the late 1990s. The program’s best finish to date occurred in the 2014 season when the team finished No. 7 at the regionals competition. To advance to Nationals, Emory would need to win the regional tournament.

“Our long-term goal is to make the national tournament and then compete for a championship,” Dave said. “The men have never made Nationals, but it is something that we have our eyes on.”

That goal will not become a reality overnight. To ensure they are progressing toward that end, the team tries to establish checkpoints on its way to the upper levels of ultimate competition.

“One of our main goals at the beginning of the season was to win a tournament,” Dave said. “Unfortunately, we haven’t achieved that yet, but we still have two more chances.”

The team nearly achieved that goal Feb. 5 when the Eagles advanced to the championship round of the Bama Secs Invitational (Ala.) after a gripping 12-11 win over University of Tennessee in the tournament semifinals. Unfortunately, Emory fell 13-10 in the championship game to Louisiana State University.

With Sectionals ahead, there is still time for this team to achieve that goal, and on the biggest stages. Win or lose, though, Olsen is pleased with the strides his team has made.

“This season we beat [No. 4-ranked University of North Carolina at Wilmington] at a tournament in Tallahassee,” Olsen said. “The foundation we have been trying to build … is improving.”

That foundation is helped in large part by players like Olsen, who competed at a national level prior to his time at Emory. For the many athletes that join the team as novices to the sport, Olsen and other experienced players have plenty of advice to share.

“Right now, Emory is in a unique position because we have really settled into a system where we have experienced players who know how to lead teams, who have played at high levels and understand what it takes to compete at Nationals,” Parsons said.

Over time, the talent pool has grown at Emory as the club has solidified its place on campus. Nearing 20 years old, men’s club ultimate is approaching an age of more consistent success.

“The general goal is always to make Emory’s team more of a consistent force rather than a team that is good one year and then falls out of favor another,” Olsen said. “Now that we have a considerable amount of talent, the task is to lay the groundwork to make sure that the success the team is recently seeing is not short-lived.”

Sectionals will offer a crash-course in pressure competition. Finishing in the top seven at Sectionals is more than within the realm of possibility. Qualifying for Regionals is a fair benchmark for success, a sign that the team is continuing to grow. Winning Regionals, on the other hand, might still be a future checkpoint — that is, for now.