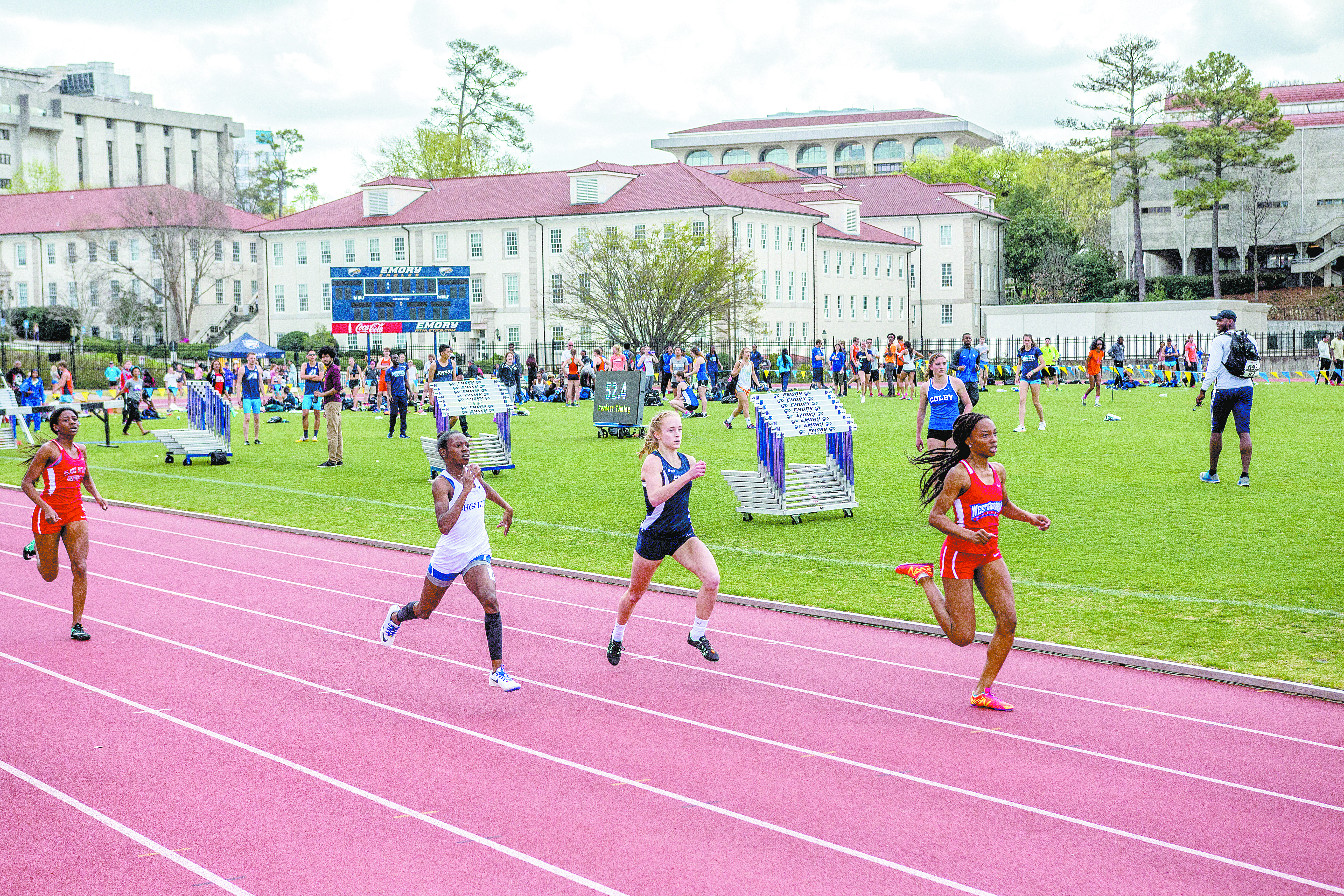 Freshman Kaitlyn Leonard (Center) races in the women’s 400m dash. Leonard finished No. 17 in the event with a time of 59.35. Matthew Hammond/Senior Staff

In their second consecutive home meet, Emory’s women’s track and field team placed fourth out of 26 schools, while the men placed third out of 21 schools in the Emory Classic March 24 to 25. The teams also accumulated a total of 28 personal bests.

“The kids performed amazing both days across all events,” Head Coach John Curtin said. “The meets so far have been really good to us and we’ve been blessed with good weather. Overall, the level of competition has been outstanding. Every single person on the team is challenged [and] there’s plenty of competition at all levels, which is really important.”

“I’m definitely happy with how I’ve been racing, but I do want to train harder and do better to move on to national meets and win there,” Rogin said.

Another strong individual performer was junior Charlie Hu, who took first in the triple jump with a mark of 14.02m. Hu went on to score in the top eight of the javelin throw, long jump and high jump.

The women’s team performed well across the board, registering 87 team points. As for individual performances, sophomore Dani Bland took the spotlight. Bland scored second place in the 100m dash with a time of 11.70, smashing the previous Emory record of 11.90. Just last week, Bland became the second Eagle ever to break 12 seconds in the 100m event.

Following Bland’s lead, Emory accrued a slew of second place finishes. One went to the 4x800m relay team of freshmen Jordan Burgess and Nicole Steiner, sophomore Radhika Shah and junior Gabrielle Stravach. The team finished with a time of 9:29.48. Stravach went on to claim second in the 1500m run with a time of 4:40.99.

The Eagles placed second in the 4x400m relay with freshman Kaitlyn Leonard, junior Erica Goldman and sophomores Dilys Osei and Ariana Newhouse with a time of 3:52.24. Freshman Isabel Saridakis added another second place in the pole vault, pulling off a 3.22m mark.

The Eagles have said goodbye to their home track for the rest of the season, and will  return to competition March 31 to compete at the Vertklasse Meeting at High Point University (N.C.).

“Saturday really pointed out to everyone what a great team this is and the type of culture we have,” Curtin said. “Everyone knows that regardless of what their event is, they’re part of our team. Everyone on the team respects all the different disciplines of the sport and it really shows through.”