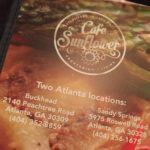 Cafe Sunflower offers an all-vegan menu at their locations in Buckhead and Sandy Springs.

Artists from the likes of Vincent van Gogh to William Blake have attempted to capture the essence of the sunflower, but it’s the creators behind Cafe Sunflower, a restaurant that offers sublime, all-vegan food, who have captured the essence of this flower the best.

The Buckhead location, which I opted for, not only serves a slightly different menu than the Sandy Springs location, but also offers Sunday brunch, in addition to the lunch and dinner served at both locations.

The atmosphere is modern, yet welcoming, as a large slate wall contrasts with the flowers on each table. The dim lights and soft background noise from the murmurs of other customers, make Cafe Sunflower the perfect setting for a first date or even a birthday dinner, for which I was originally enticed to attend.

As a lover of chicken and shrimp, I was apprehensive about the completely vegan menu, but I approached the meal with an open mind and empty belly.

I ordered the sesame soy chicken, which came as a stir-fry with vegetables over brown rice, for a whopping $19. The soy tasted like chicken and had just the right texture and density to mimic the meat. Its crispy outside made the soy feel like a guilty pleasure, but the meal was hearty and full of nutrients. The vegetables adequately soaked up the sauce and, yet were crispy enough to crunch ever so slightly. The portion sizes may seem small at first, but because the food itself is so filling, I had to take half home to save room for dessert.

For dessert, my group ordered a slice of chocolate cake and carrot cake. Each “slice,” however, was large and dense enough to satisfy three ravenous college students.

Being a carrot cake kind of girl, I dove for that slice first. The cake was well spiced with hints of cinnamon and a perfectly creamy frosting. The chocolate cake, on the other hand, was decadent, almost a little too rich for my taste.  The cakes proved, like the chicken, to taste the same, if not better, than the non-vegan versions I’ve tried in the past.

The service was as wonderful as the food. When it came time for dessert, the staff took the care to explain each cake to the birthday girl so she could choose the slices that were just right for out group. Our waiter and the hostesses were consistently warm and caring.

Overall, Cafe Sunflower earns four and a half stars. The restaurant is a little pricy for a college-student budget, but delicious whether you love meat and are up for something new or you’re vegan and looking for the perfect meal to satisfy any craving.