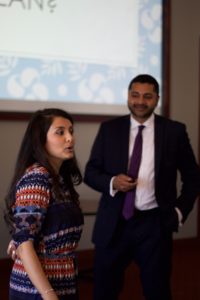 Some deans provide academic advice, others assist with career and professional endeavors, but Emory students can now proudly say that we have been given the rather unorthodox opportunity to receive dating advice from Senior Vice President and Dean of Campus Life Ajay Nair.

The Nairs said that they hoped to address that lack of communication, and each discussed how  their parents got married and immigrated to the United States.

“[My parents] had a love marriage but were very much opposed to [me and my wife’s] love marriage,” Ajay Nair told to the audience. The term “love marriage,” a common phrase used by people from South Asia, refers specifically to marriages in which a couple meets through their own accord rather than through an arrangement via their parents.

Paayal Nair’s and Ajay Nair’s paths converged when they both started college at Pennsylvania State University the same year. Paayal Nair first encountered her now-husband at an Indian cultural event at which Ajay Nair spoke.

“This is not my personality at all, but I leaned over [to my friend] and I said, ‘I’m marrying that guy one day,’” she said.

Paayal Nair also discussed the occupational discrimination that some conservative Asian parents harbor when it comes to their child’s partner.

“[Ajay Nair] is not even a doctor,” her mother once said to her.

The Nairs, however, intentionally integrated themselves into the lives of their future in-laws to ensure eventual acceptance from each other’s families. For instance, Paayal Nair asked her sister to tag along whenever she was going to meet Ajay Nair.  Additionally, she tutored her now-husband’s brother to help facilitate a smooth transition into the family.

And those tutoring sessions paid off. Ajay Nair recalled that his father, upon seeing Paayal Nair’s tutoring sessions, said, “I never thought of her in this way,” a testament to her successful integration into his family.

Through this constant presence within each other’s lives, the families finally approved of their relationship by the time the Nairs were in their early twenties, and they married when each was 23.

“Through our story and transparency, it opened up the floor for everyone to share their ideas with each other,” the dean said in an interview with the Wheel. After the Nairs’ discussion ended, the talk again turned into an open conversation between the audience and the Nairs, regarding the key topics of the couple’s anecdotes. “The talk … offered a different perspective [on dating],” Anjali Patel (18B) said. “My parents had a kind of similar situation [to Ajay Nair and Paayal Nair’s marriage]. They made it more relevant when they touched on race issues and expectations. I had never thought about [dating and love] in an intellectual way.”