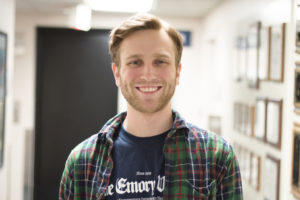 Zak Hudak, College senior and Editor-in-Chief of The Emory Wheel

The Wheel sat down with Editor-in-Chief and College senior Zak Hudak at the end of his term to discover his deepest, darkest secrets. A philosophy major, Hudak joined the Wheel staff as assistant sports editor his freshman year, and most recently served as the paper’s managing editor. The following answers are the results of our investigation. This transcript has been edited for clarity and length.

The Emory Wheel: Are you a boxers or briefs guy? On a side note, which sock do you put on first?

EW: Where in Atlanta would you bring someone on a first date? Why?

ZH: I think Little Five Points. It’s just an interesting place. Walk around. See what’s going on. Vortex there. Incredible burgers. They have a burger with buns that are actually grilled cheese sandwiches. It’s incredible. There’s always something going on there.

For people who are from out of town [who] I’m trying to give the Emory experience to — I’ve even taken my parents there — Falafel King. I think that’s a staple at Emory. If you really want to experience going to Emory, that’s a piece of it.

EW: What is your favorite bathroom reading material?

ZH: Traditionally, The New York Times. I love The New York Times, especially the Sunday issue. You can probably find in that bathroom down the hall [from the Wheel offices] — sections from the Times [I’ve] left there. But lately, I’ve actually started using Twitter, which I still don’t know fully how to do, but I’m getting at it, and I’ve loved it in internships when working wire services. At this point, Twitter has become my little personal wire service, so I’ll just be sitting in there, getting a constant feed of news.

EW: If you could only eat one food for the rest of your life, what would it be? Why?

EW: What is your favorite physical attribute?

ZH: Everybody’s gonna say my hair. Yeah, I guess my hair. Hopefully it stays around for a while. We’ll see.

EW: What is the weirdest scar you have and how did you get it?

ZH: On my hand, you can kind of see scarring. In the summer, when my hand gets tan, it stays tan in a certain spot. When I was in high school, my friend who is now in the army and I were playing with fireworks and combining them, being little pyromaniacs. Things went wrong and this whole pile of gunpowder [exploded] on me. We were inside. I should clarify that. It was not supposed to go off. My friend is not even [an] army ranger. He’s Special Forces. Really intensely motivated guy. Really strong. Totally comfortable with all kinds of fighting stuff. The second he sees the flame, [he] runs out of the room and shuts the door. So I’m in my room with [fireworks] flying around. It was fine, but I got some burns on my hand and on my leg. My mom made me call my baseball coach and tell him that’s why I wouldn’t be at practice. Not my finest moment.

EW: What was the most embarrassing moment you’ve had in front of a professor?

ZH: I won’t [name] the professor, but a couple years ago, at some point, I had been doing like a million things. I pulled an all-nighter, and my exam was from 8:30 [a.m.] to 10:30 in the morning. I woke up at 10 [a.m.], and you know that moment when you wake up and all of the blood goes to your feet and you’re just like “Uh-oh”? I put on a shirt, pants, jumped in the car, flew to school, just parked illegally next to the building, went inside and said to the professor, “Give me the exam,” and he was like, “Go wait outside.” The entire class was looking at me. I came [outside] and the professor looked at me and said, “You look like you could really use breakfast.” And I said, “Yeah.” He took me to breakfast, got me coffee and [we] went back and [I] took the exam. This was happening when I took over the paper, because I remember thinking that this professor had shown me kindness that I might not show other people, and it was kind of a check.

EW: If you hadn’t spent your college career on the fifth floor of the DUC where would you have been and why?

EW: What is your recipe for surviving a production night? What food to order, etc.?

ZH: It helps having the [Editor-in-Chief] office because I can escape a little bit. My food to get through production was subs from the Sandwich Shop, where Mama Tiger is. Now, I guess whatever good food [Managing Editor and College senior] Samuel Budnyk is ordering. I also like having my notebook. I have everything that’s going in every issue and its status in there. That keeps me sane when there’s a hundred moving parts.

EW: What is your favorite Wikipedia article?

ZH: It’s been pretty interesting to watch the Wheel’s Wikipedia article change when editors change stuff. I’m not positive about this. I’m pretty sure last year when the Trump chalking happened — our coverage was really major and we were under fire from some areas — I think some people changed goofy little things. I know on the Emory [Wikipedia] page they changed the mascot from Eagles to Pansies. I don’t know what they did to our page but something [happened]. It’s been interesting to watch that change because I’ve been a part of that.

EW: What has been your most cherished memory on the Wheel?
ZH: There have been a ton. I’ve been working on the Wheel since the fall of my freshman year. It’s weird because so many people have gone by. What I’ll look back on most, or look to first, I don’t know if I’d say it was a happy time, it was in the [middle] of the pro-Trump chalk slogan protests where there was a two-week period where the Wheel became a national authority on something, not on something huge but still we were who places looked to. I’d become the editor-in-chief two or three weeks prior, and all of sudden we were in the spotlight. It was an incredible thing to watch, and it was hard to step back and look at it because you’re in the eye of the storm. When I stepped back and saw 25 people working side by side to make this paper come out and continue our coverage, it was really an incredible thing.