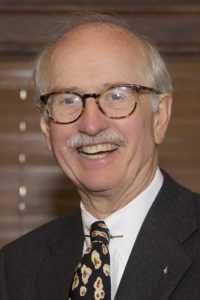 From the front row of Commencement a few years ago, Tom Brodnax (66C) listened to a new graduate speak about college experiences through hashtags. Unlike the hundreds of audience members that grinned when Kadean Maddox (14C) snapped a group selfie with his iPad, Brodnax peered through the viewfinder of his DSLR. The image, which earned a Critics Choice Award from “Atlanta Celebrates Photography − My Atlanta,” is one of many contributions Brodnax made to the Emory community.

“I think there’s probably dozens of people that have photos that Tom has taken in their home, because he’s really good at capturing the essence of family and love, and just humanism, and I think that’s a beautiful gift that he has,” said Jennifer Crabbe (98OX) (00C).

Brodnax received the J. Pollard Turman Alumni Service Award in 2002. In 2012, he was awarded the William L. Norton Outstanding Alumnus Award from the Oxford College Alumni Board. Apart from his accolades, Brodnax’s photographs of student and alumni events are regularly featured in the Emory Magazine, updating the archive for over a decade.

Before finding his calling as an Emory Alumni Association volunteer in the winter of 1996, Brodnax attended Oxford College for a year and then graduated from Emory University. As a college sophomore, Brodnax spent a year at George Washington University in Washington D.C. while working under Former Georgia Senator Richard B. Russell. To fund his education, he also operated elevators and oversaw automatic typewriters. After graduating, Brodnax served as the operations officer in the U.S. Navy on the Destroyer Squadron 20.

Brodnax found a career in marketing and data analytics at IBM, where he learned to write lines of code. Having taken an early-retirement program, Brodnax became the technical expert in charge of streamlining direct mail and basic contact information from Emory’s alumni database.

Crabbe, during the summer after her first year at Oxford College, worked with Brodnax at the Emory Annual Fund, where they completed data entry, filing and special projects. The two of them would joke with each other, but Crabbe said at the time she did not really understand the depth of loyalty that Brodnax had for Emory.

“His selflessness with his time, the fact that he would be the first one in the door and the last one out of the door,” Crabbe said. “That he’s working on pretty substantial projects around data or around documenting events through pictures.”

Brodnax says the opportunity to volunteer came by accident, when he had to fill the vacant spot of an event photographer who fell sick. Luckily, he says, he had the proper camera to get the job done.

Brodnax expressed his enjoyment of telling the stories of his subjects. One such instance was when Brodnax photographed his friend, Bill Paul (48C), wrapping an alumni medallion around his grandson’s neck during Commencement weekend. Brodnax persuaded Paul to attend the event, and was subsequently thanked several times for dragging him out of bed.

“Well, it turned out to be a treasured photo by Bill and certainly by me because it really signified continuity,” Brodnax said. “You see the generation of people that become Emory fans and Emory family. I guess there’s such pride and a family connection. None of us, to my knowledge, that were working that event were really prepared for its emotional impact.”

Brodnax photographs many of the same alumni events annually — he continues to capture the glamour of the activities. Networking Night, for example, is mainly occupied by extensive dialogue, fake chuckles and business attire. The shot that stood out for Brodnax was of two men exchanging business cards.

“I much prefer capturing people when they are engaged,” Brodnax said. “I try to get photos of activity as best [as I] can.”

Brodnax showcases his photography skills at events such as the Candlelight Crossover Ceremony, when College seniors cross a bridge to the Miller-Ward Alumni House around dusk, which requires patience and workmanship.

“I mean if you ever want a challenge for photography, come stand with me [and] it will be an experience, let me tell you,” Brodnax said. “The sun goes down fast and certainly shooting with flash you would lose all the ambience. So, the light changes so rapidly that you go from almost too bright to unable to tell what the picture is.”

Brodnax’s enjoyment of photographing events in and around Atlanta, he said, boils down to two things: meeting some of the nicest people and creating a photo record of events.

“I think [we all] enjoy seeing the fruits of our labors being enjoyed by other people, and occasionally you will snap a photograph, a snapshot, that is unique and it may mean something to somebody that was never intended,” Brodnax said.