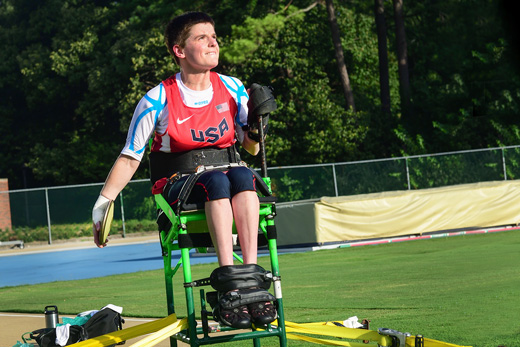 In front of thousands of spectators from across the world, Emory Research Professor and alumna Cassie Mitchell (04G, 09PhD) tuned out cheers of “U-S-A, U-S-A!”, looked up at the clouds and thought about cows.

It’s all part of her refined technique, which helped Mitchell win a silver medal in the Women’s F51-52 Discus and a bronze medal in the Women’s F51 Club throwing events in the 2016 Paralympic Games in Rio de Janeiro, Brazil, Sept. 11 to Sept. 14. Mitchell said that she competes against other quadriplegic athletes with similar levels of disability.

Her method, Mitchell explained, relies on both physical and mental techniques.

“As a field athlete, you need to be relaxed or your muscles will tighten up,” she said. “I picture a nice, calm spot. One of the training sites I throw at a lot is a pasture with cows and a pond. In competition, I look up at the clouds and put myself in that serene spot.”

A research professor at the Georgia Institute of Technology and Emory University Wallace H. Coulter Department of Biomedical Engineering, Mitchell competed for both the U.S. Paralympic Track and Field and U.S Paralympic Swim Teams in the 2016 Games.

However, Mitchell’s disease continued to progress, forcing her to leave wheelchair basketball behind and transition to para-cycling. What began as a hobby quickly became more — she racked up seven national championship titles from 2010 to 2012, according to her website. However, Mitchell was not selected for the eight-member U.S. Cycling Team for the 2012 London Paralympics. Just two days later, Mitchell participated in the track and field trials, earning her spot on that paralympics team.

Without wrist function, however, she said she faced an additional challenge in discus throwing, relying on the speed of her spin to create a centrifugal force that keeps the disc in her hand, then she sends it soaring across the field.

Shortly after the 2012 London Games, Mitchell said she began training for the 2016 Games, picking up world records in shot put, discus and the 100m.

“When I aimed for the world record [in Discus] and it got broken by another athlete, I was  disappointed,” Mitchell said. “But when you go on the stand and see the flag of your country raise, it dissipates.”

In Fall 2015, Mitchell began to notice problems in her ability to recover after periods of intense exercise. In April 2016 — just five months before the Games — she was diagnosed with chronic myeloid leukemia and received chemotherapy treatment at the Winship Cancer Institute at Emory University Hospital (EUH). Mitchell continued to train with the go-ahead from her doctors.

“I was at my next competition 10 days after my first treatment,” Mitchell said.

Two weeks before the start of the 2016 Games, the International Paralympic Committee disqualified all Russian athletes from the games for alleged doping. Their slots were re-allocated, opening a spot for Mitchell on the U.S. Swim Team, where she placed 7th the 50m backstroke, in addition to her positions competing in the F51-52 Discus and F51 Club throwing events. Mitchell was one of only three American Olympians or Paralympians to compete in two disciplines at the Rio Games.

When she’s not training, Mitchell conducts biomedical engineering research, modeling and optimizing treatment outcomes for amyotrophic lateral sclerosis (ALS) patients, as well as designing treatments for the future. Mitchell added that she enjoys watching her undergraduate students excel in their lab work and seeing how her success in the lab benefits ALS patients.

Mitchell’s athletic achievements and research complement each other, as she uses her physics background to perfect her technique.

“Every day, I use modeling to measure the angles of my throw,” Mitchell said. “Some of my best ideas have come during training, and I don’t think that’s coincidental.”

Although Mitchell has collected world records, international titles and Paralympic bronze and silver medals, she lacks a gold medal. She said that she plans on making up for that absence at the 2020 Tokyo Games.
“You have to be thankful for what you have,” Mitchell said. “Strength, faith in God and support from family and friends have helped me through all sorts of obstacles. I have bad days, but at the end of the day, I always make the choice to be the best that I can be.”