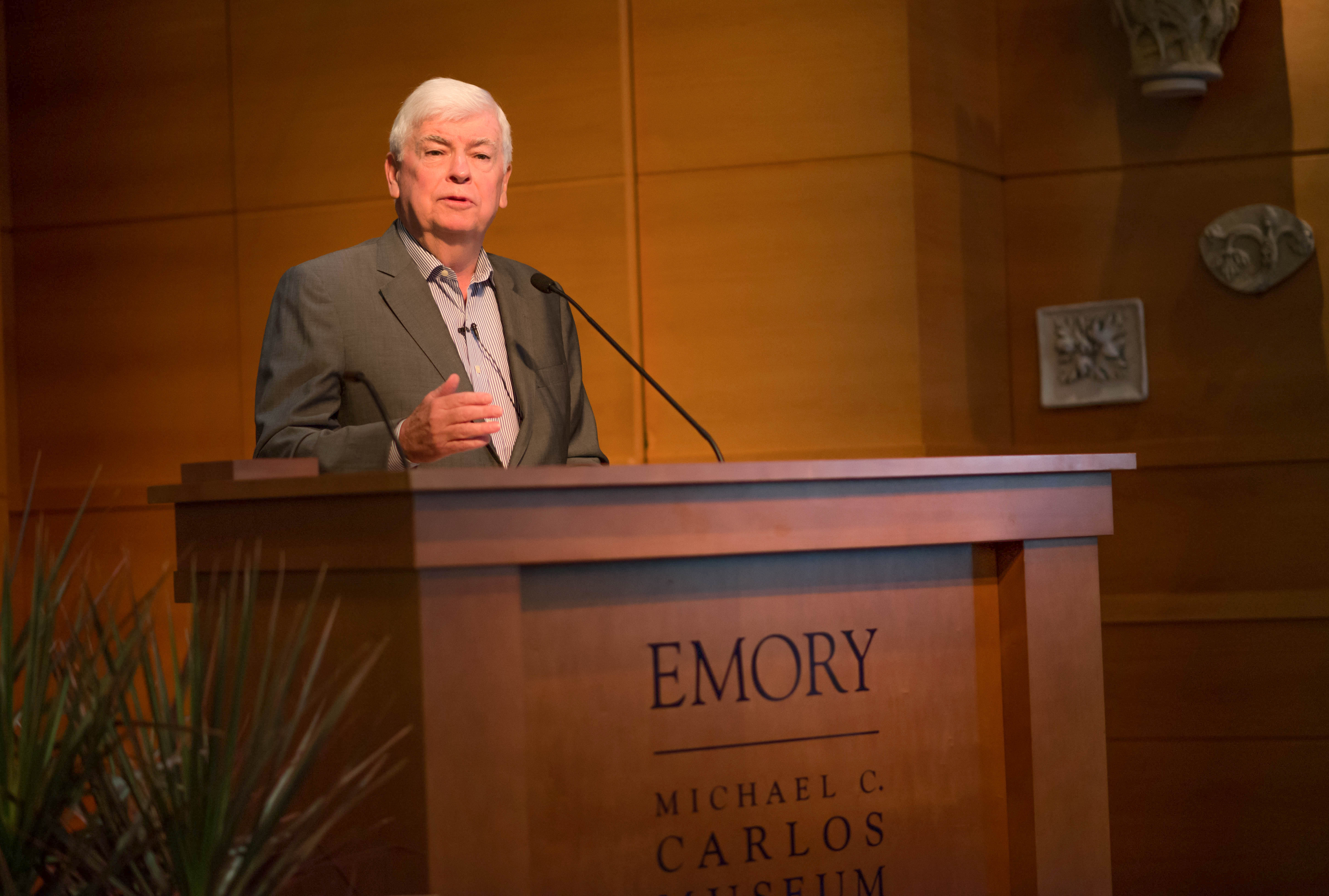 Former U.S. Senator and CEO of the Motion Picture Association of America (MPAA) Christopher Dodd spoke about the value of the film and television industry in the U.S. and Georgia for the Sept. 22 keynote address at the 40th annual Cineposium, an international film industry conference.

“There’s never been a better time for us to be in the business of making movies and television together, both in this country and across the world,” Dodd said to more than 100 industry professionals in Emory’s Michael C. Carlos Museum.

After 36 years in Congress, Dodd was appointed MPAA CEO in 2011. His address kicked off the conference, which was held in Atlanta for the first time in 39 years and at Emory for the first time ever. Sponsored by the Association of Film Commissioners International (AFCI), the conference gave media professionals the opportunity to share experiences, learn how to build successful crews and networks and handle industry crises.

Dodd’s speech and Cineposium’s 2016 theme (Building Your Business: A Focus on Infrastructure) looked beyond the economic gains and focused on the significance of the crew members’ and legislators’ work in the film industry. He shifted the spotlight from directors, writers and actors to those other employees in the industry, explaining how their hard work makes the industry successful and “creates a positive ripple effect” — an effect Dodd hopes will inspire new ideas in the industry, especially from college students.

“Universities are a great place to argue and debate and discuss how do we protect creative content, how do we encourage diversity, how do we exploit the talents and abilities of people in our colleges and high schools along the country,” Dodd said in an interview with the Wheel following his address. “[College is] an exciting place to be right now, to be a student in this day and age when so much is happening in this industry.”

“It’s a great way for us to let the local film and media industry know ‘Hey, we’re here. We actually have a production program [and] a film and media management program,’ ” he said.

Various film and television shows have been shot on Emory’s campus in the past year, including Denial, Gifted and Stranger Things.

The film and television industry has created more than $41 billion of business in the U.S., with the state of Georgia creating more than $1.7 billion in wages and 25,000 direct jobs from the industry, according to Dodd. Georgia is currently the third largest market in the nation for film and television production, after Los Angeles and New York City, he said.

Dodd said that AFCI members asked him to deliver the keynote address to support the growing relationship between AFCI and MPAA, the professionals working in the industry and those marketing films and shows to a larger audience.

College senior Ivy Zhang, a film studies and economics double major, said she was excited that Emory hosted the conference, citing the increase in film events and opportunities at Emory.
“[Cineposium] was a great opportunity for me to just meet with people from those industries, especially the sector of filmmaking,” Zhang said.