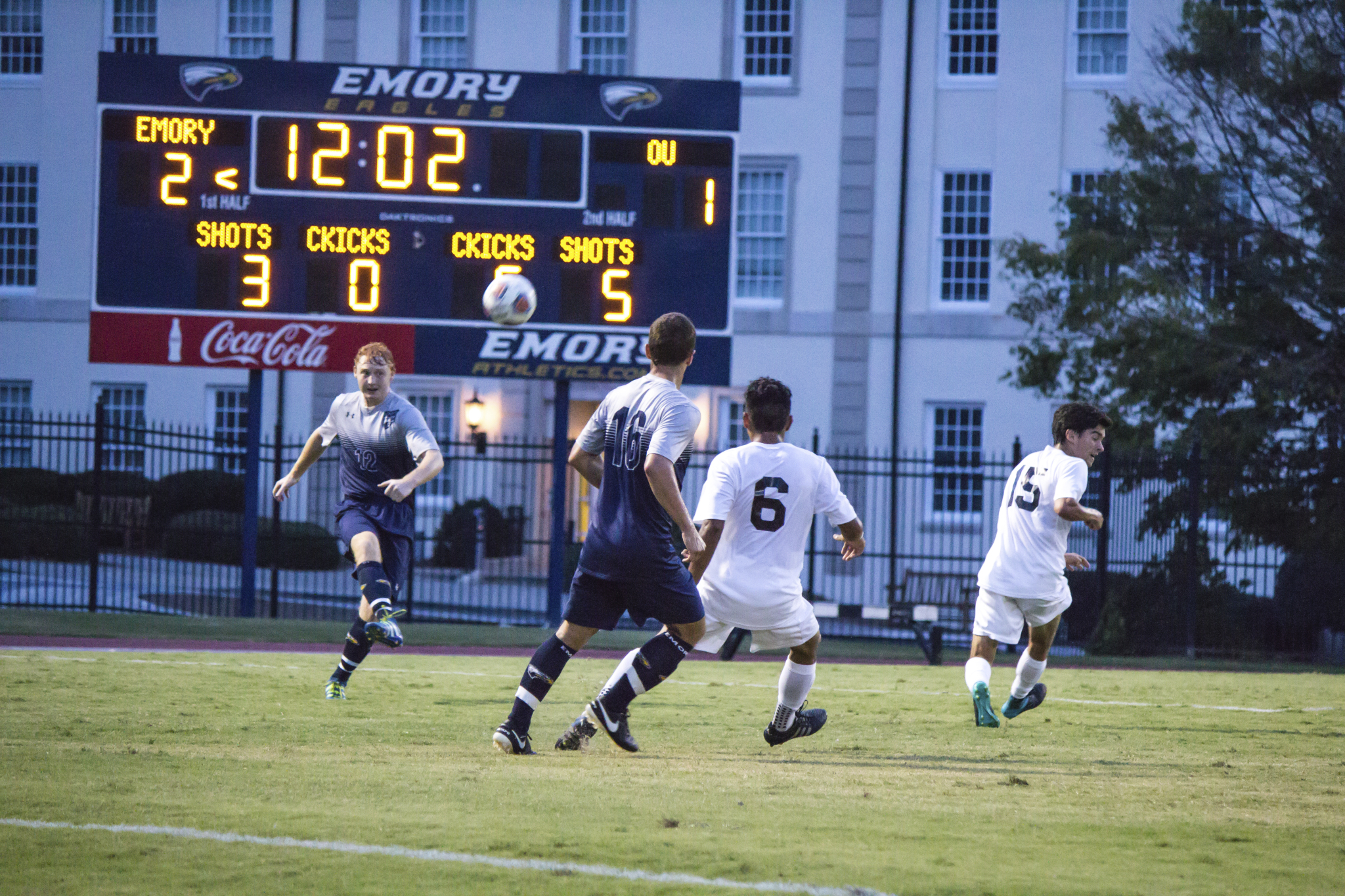 For the third straight weekend, men’s soccer faced back-to-back games, but unlike the two invitationals that started the season, Emory finally put together a complete weekend. The Eagles came away with a 2-1 win at Berry College (Ga.) Friday, followed by a 3-2 victory at home against local rival Oglethorpe University (Ga.) Saturday.

Emory finished their three-game travel stint on a high point at Berry. The first goal of the game came from a rather unexpected source, as junior center back Cody Gardiner finished a header off a corner from sophomore forward Moustafa Khattab.

With Emory clinging to the 1-0 lead at half, Berry came out strong to start the second: Berry sophomore forward Steven Moore slipped a goal past junior goalkeeper Jake Deuel, tying the game at one apiece.

The tie was broken in the 71st minute when junior forward Jason McCartney gave Emory the 2-1 advantage, a lead they would not relinquish as they closed out the tough win.

“Berry beat a very good [University of Mary Washington (Va.)] team, and we were playing there the first night they had lights, so they had a big crowd, and I think our guys responded with a lot of grit,” said Head Coach Sonny Travis.

There was little time to celebrate before their match against Oglethorpe, but for the first time in nearly two weeks, the Eagles enjoyed home-field advantage.

Oglethorpe came out firing and, for the first time all season, Emory failed to score first. The Oglethorpe Stormy Petrels took the lead with a header from senior midfielder Gustavo Martinez in just the third minute.

Unused to facing such an early deficit, the Eagles showed no signs of panic. In fact, the Eagles rolled from then on, scoring three consecutive goals over the next 50 minutes. Their response was swift, as sophomore outside defender Evan Floersch found the back of Oglethorpe’s net just a minute after the Stormy Petrels’ initial goal, tying the game. Emory’s second and third goals came from senior center defender and captain Scott Haley in the 28th minute and sophomore forward Moustafa Khattab in the 53rd minute, respectively.

Oglethorpe hung around, even managing to net a goal in the 83rd minute, but in the end it was too little, too late, as the Eagles held on for the 3-2 victory. The win brought the Eagles up to 4-2 on the season.

“I thought we had a lot of good moments this past weekend. I think our team is really progressing, getting better, figuring some things out, and defensively is strong. These are two games we really finished out,” Travis said.

Khattab pointed to the team’s improved mindset as a key factor in their success.

“Our attitude as a team has been much better this year. Even in games where we are down, we are still fighting to the end and finishing strong,” he said.

Offensively, the Eagles have played spectacularly.

“We struggled to score last year, so we wanted to focus on our offense this year, and a lot of guys have really stepped up,” Khattab said.

Unfortunately, the weekend ultimately ended on a sour note, as Haley suffered a torn meniscus during the game against Oglethorpe and will likely miss the remainder of the season.

“Even outside of the soccer aspect, [Haley] is our captain, and we will miss that leadership,” Travis said.

The loss of Haley is huge, but the team remains resilient.

“We will try and go as far as we can this season and do it for [Haley],” Khattab promised.

The Eagles will face off at home against Sewanee: The University of the South (Tenn.) tonight at 7:30 p.m.