Last week, around 4,000 soon-to-be freshmen received acceptance letters inviting them to join the Emory College Class of 2020. Combined with the prior-released early decision acceptances, 4,927 total students have been accepted to Emory College and 3,282 to Oxford College.

Over 1,000 students earned a spot in both colleges and may choose to attend either campus.

“When I first found out I was accepted, I accidentally dropped my laptop out of excitement,” incoming Oxford College freshman Jahnvi Jain said in an interview with the Wheel. “It was absolutely surreal.”

Assistant Vice Provost for Undergraduate Enrollment and Dean of Admission John Latting noted that, this year, the volume of applications for Emory College decreased by about three percent from last year’s record-breaking 20,519. However, this admissions cycle still marks Emory’s second-highest year for applications, with 19,924 students vying for acceptance to Emory College.

“While the volume of applications was down a bit, the number of really incredibly strong students who applied to Emory was up significantly,” Latting said. “For example, the number of students we regard as being really elite prospects, with superb academic credentials in every respect, was up 19 percent this year.”

He believes that the released data about certain academic measures reflect the strong class of admitted students this year. These measures include a mean unweighted GPA of 3.81, a mean SAT composite score of 2135 and a mean ACT score of 32 — all higher than last year’s admitted student statistics.

“We were surprised by how strong, in an academic sense, the applicant pool [and] admitted class [were] this year,” Latting said. He added that, while Emory will not know how many students will accept their offers of admission until after the May 1 deadline for making the admissions deposit to secure a spot in the class, he “suspect[s Emory] will be competing even more frequently against top institutions for the students we’ve selected.”

Incoming College freshman Susan You echoed this sentiment, observing that that this year’s applicant pool appeared to be particularly competitive. “I was frantically checking College Confidential before I got my decision, and it looked like everyone had been turned down or waitlisted,” she said in an interview with the Wheel. “I just freaked out when I learned I had gotten in.” 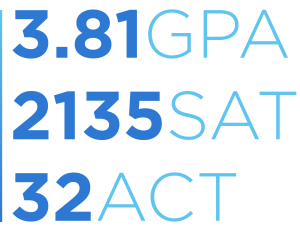 Latting was also struck by the diversity that characterized the accepted class of 2020, including students from around the world and a variety of backgrounds. Out of 4,344 international applicants, Emory accepted 673. Admitted students come from almost 80 different countries by citizenship and, within the U.S., 48 different states. Additionally, admitted students from India outnumber those from China for the first time in history.

Based on last year’s numbers, Latting anticipates that the yield of admitted students who ultimately enroll will be roughly 28 percent of those offered admission, on par with the 2015 application cycle.

Moving forward, Latting said that the Undergraduate Admissions staff is considering making potential changes to the financial aid process, in order to increase the percentage of admitted students who choose to enroll. The staff is seeking actively also to increase campus-wide involvement in the recruitment process, with greater engagement of faculty, students and alumni, he said.

“We are always looking for ways to increase the breadth of our applicant pool and of the students considering Emory,” Latting said. “We are looking for new partner community-based organizations to help us do that, as well as new ways to communicate our message and also how to strengthen our financial aid program so that we can better answer the question families have about how they’ll pay for an Emory education.”

Most notably, next year’s application cycle will mark the first time that Emory will accept applications coming from the Coalition for Access, Affordability and Success’ upcoming application platform, in addition to the currently used Common Application.

“We hope it will increase the socioeconomic, racial, ethnic and geographic diversity of the applicant pool and also insert a higher level of technology and design into the application process,” Latting said about the new platform. He expressed optimism that the Coalition for Access, Affordability and Success application will offer an interesting and engaging user experience for prospective students.

Ultimately, Latting said this application cycle represents one of the strongest for Emory. “It’s a real privilege to do admissions work at Emory. Our applicant pool is so strong, with so many serious scholars and engaged citizens,” he said. “Each admission cycle fills me with optimism about the future.”