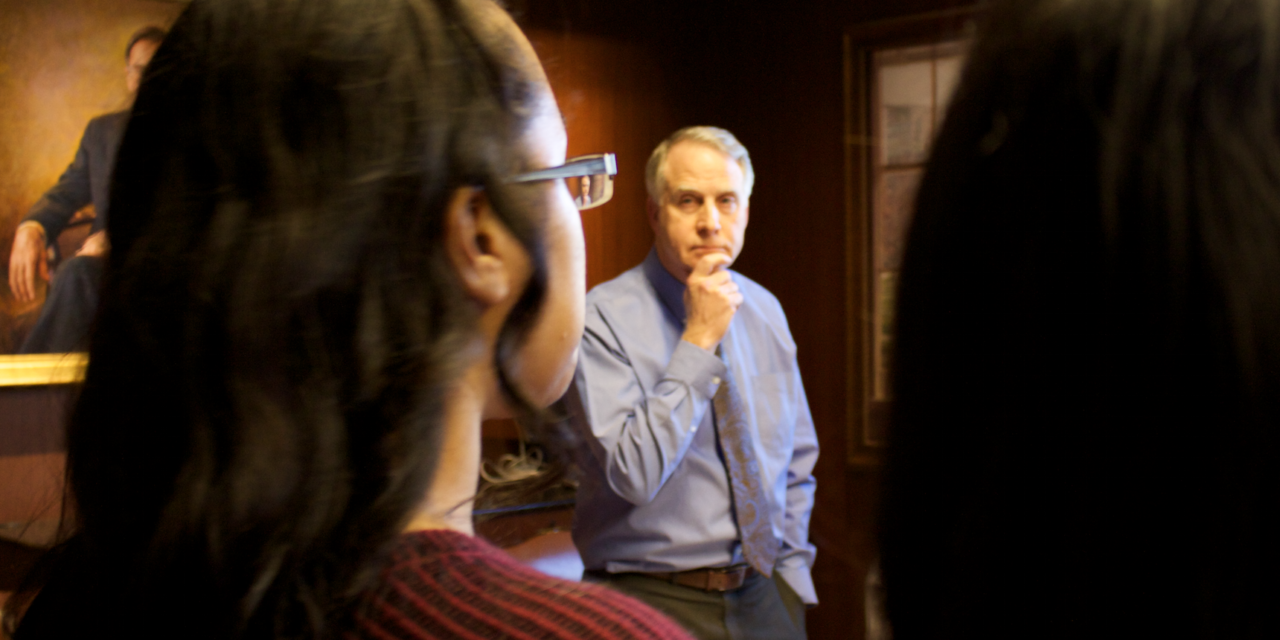 “Activism can be a powerful tool to raise the consciousness of the entire campus community,” Senior Vice President and Dean of Campus Life Ajay Nair wrote in an email to the Wheel, in response to the March 21 Trump chalking protests. “Our purpose at Emory is to educate and practice community. This is how we teach our students to lead beyond the ivory tower.”

Nair’s positive response to the student activism, which he called “an effective strategy to gain the attention of the campus community on very difficult issues,” reflected general administrative sentiment.

University President James W. Wagner echoed this perspective in a March 22 interview with the Wheel, praising the protests as a “mechanism for interaction.” He said that college campuses should encourage activism as a form of expression of concern that will ultimately better the community.

“Look, I’m so pleased I was in the building when [the protesters] arrived,” he said. “The opportunity to listen and their willingness to try to explain more and more clearly to me the root of the concerns was very effective.”

In a campus-wide email, Wagner outlined four steps that administrators plan to take in order to address the issues raised by the protesters. He proposed “immediate refinements to certain policies and procedural deficiencies; regular and structured opportunities for difficult dialogues; a formal process to institutionalize identification, review and addressing of social justice opportunities and issues; and commitment to an annual retreat to renew [their] efforts.”

Wagner said that social justice, racial justice and freedom of expression issues have been at the forefront of administrative discourse in the past year.

“I hope beyond thinking and conversation, we are also harvesting the fruit of that to go beyond conversation and identify where we can take action,” he said. He cited the Racial Justice Retreat and its follow-up event, the Next Steps Committee, which will release its recommendations by April 1, as examples of tangible progress in this area.

Wagner added that the Freedom of Expression Committee is meeting to address whether the person or people responsible for the chalking were in compliance with Emory’s policy. He said that they would debate technical issues, such as whether or not the chalkings were done on appropriate surfaces. However, he believes that the broader concern motivating the protests had to do more with the ideas the chalkings stood for than how they were done.

“Was it really just a message about a political preference, a candidate preference, or was it a harsher message?” he asked. “And I will tell you, those who met with me were genuine in their concerns that it was the latter.”

Ultimately, Wagner said he thinks that Emory’s Respect for Open Expression Policy, which states that Emory is “committed to an environment where the open expression of ideas and open, vigorous debate and speech are valued, promoted and encouraged,” permits people to “feel as though they have safety in speaking up” and allows administrators to “feel comfortable responding to incidents and concerns like this.”

However, College senior Alex Reibman believes that the proposed administrative response will prove to be counterproductive.

“I think the best step forward would be for administrators to engage in discussions with the students,” he said. “They could actually capitalize on this and allow for a better way of freedom of expression.”

He suggested that administrators consider the possibility of implementing “free speech zones” at Emory, which would allow people to voice their personal opinions and for others to counter those opinions. “Hate speech, whether we like it or not, is a crucial part of free speech,” he said.

College freshman Amanda Obando disagreed with Reibman’s view, saying that it dismissed the personal experiences of many who felt offended by the chalking.

“My reaction to the chalking was one of fear,” she said. “I told myself that it was a prank, and that the responsible individual was probably laughing in their room. I told myself that Emory would do something about it.”

Obando felt concerned that no one other than the Latino community and its allies took definite steps to address the offensive implications that the chalkings held. “People still don’t understand that the protest yesterday served not only as an expression against one interpretation of the chalking, but also as a collective manifestation against the fear that a bigot leader can create,” she added.

For some administrators, the protests served as a reminder of the challenges that the Emory community faces. While Assistant Vice President for Community Suzanne Onorato said that her values do not align with those that Trump espouses, she did not immediately realize the extent to which the chalkings could affect people when she first saw them on campus.

“As an administrator, I can say that we’re not helping to alleviate that pain,” she said. “They want to know why I’m not contacting them directly when these issues happen, why we’re not reaching out to students, what we can do better.”

Nair acknowledged that, historically, the burden of advancing racial justice in higher education institutions has disproportionately fallen to students of color.

“They carry the dual burdens of advancing a social agenda and achieving academic success,” Nair wrote. “We rarely account for or honor the lives and labors of these students and their enormous contributions to transforming our communities.”

Upon speaking with student protesters at a March 22 meeting in the Centro Latino, Onorato felt that she gained greater insight into the pain that some students experienced as a result of the chalkings. She and the students developed action steps that emphasized greater communication and transparency between administrators and the Emory community, such as increasing points of administrative contact and fostering awareness of minority issues within the Emory community.

“The Racial Justice Retreat addressed some of these problems, but we still have progress to make,” she said. “We need better and more communication and transparency. We need to make sure our students are heard.”

Nair added that he believes Emory administrators can “be proactive and create structures to respond more effectively to campus climate issues,” noting that this will be a likely outcome of the Black Students of Emory demands and subsequent developments in student activism over the course of this year. He said he believes that Wagner’s aforementioned planned steps serve as a testament to Emory’s commitment to create a “sustainable movement that reimagines and recreates a more socially just university community.” He hopes that this goal would ultimately position Emory as a preeminent institution for addressing social justice issues.

“Indeed, the results of student activism on our campus have helped to place Emory on the path of innovation in terms of how we address issues and improve our community,” he wrote.