Emory goes undefeated in matches against Millsaps and Centre 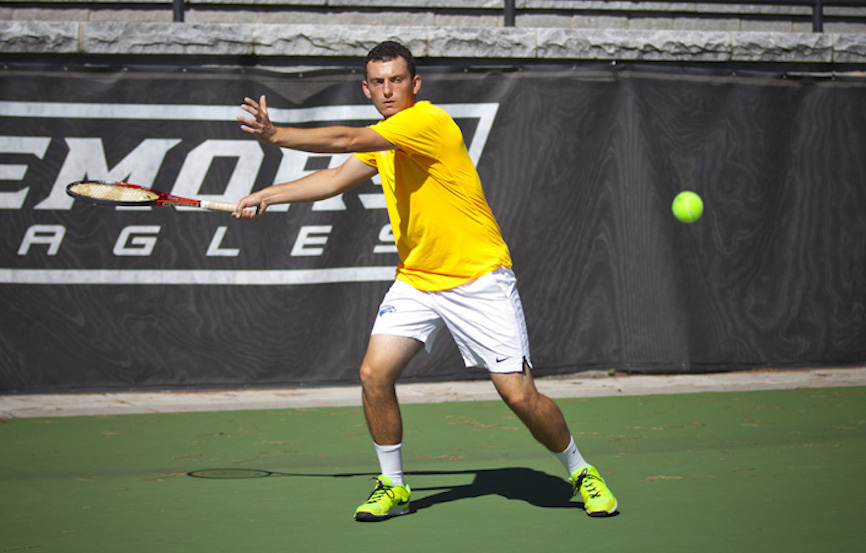 On Sunday, March 20, Emory’s men’s tennis team played a pair of matches against the No. 9 Millsaps College (Miss.) and the unranked Centre College (Ga.). Emory won both of the matches by a score of 9-0.

First, Emory took on Millsaps. On the singles side, the men did not lose a set. Senior Rafe Mosetick, playing in the first spot, won 6-4, 6-1. Freshman Jonathan Jemison played next and won 6-2, 7-5. They were followed by junior Aman Manji, freshman Adrien Bouchet, junior Josh Goodman and sophomore Andrew Harrington, who all won their matches; Harrington did not lose a game, winning 6-0, 6-0.

On the doubles side, sophomore Scott Rubinstein and freshman James Spaulding won 8-3. Mosetick and Jemison won by a score of 8-0, and the team of sophomore David Omsky and Harrington won 8-2.

Later in the day, the Eagles took on Centre College, also winning 9-0. Once again, Mosetick led off with a win by a score of 6-0, 6-0. He was followed by Goodman, sophomores Alec Josepher, Roberto Bazzarella and John Li and freshman George Congdon. Congdon also won by a score of 6-0, 6-0. In doubles play, the team of Rubinstein and Spaulding won 8-2. They were followed by the team of Josepher and sophomore Zach Surmacz, who won 8-1. The final pairing in doubles featured junior Andrew Lo and sophomore March Zheng who defeated their Centre College opponents 8-1.

The pair of victories moved the Eagles to 11-2 on the season. They will retake the court next at home on Wednesday, March 23, when they take on Kalamazoo College (Mich.).