‘The Witch’ Defines Evil On Film 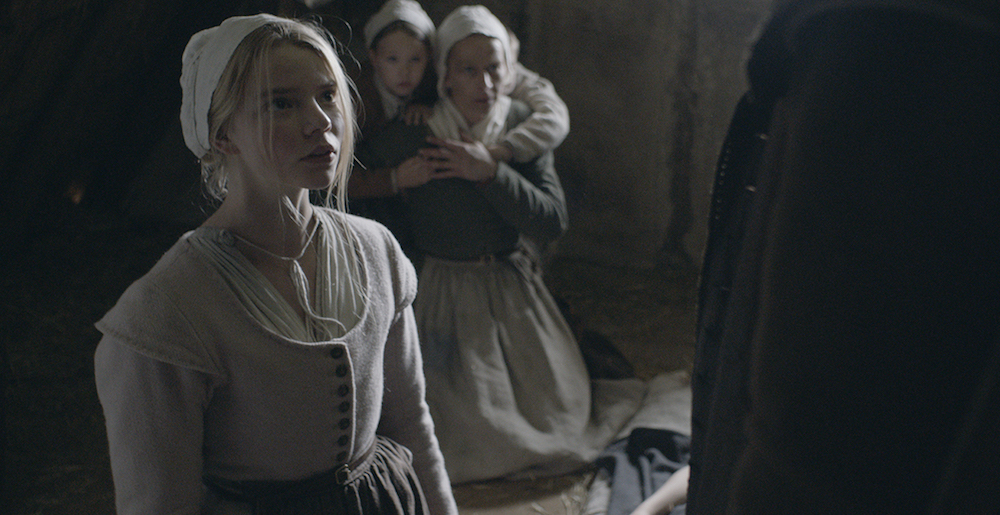 As you watch a mutilated old crone grind up a baby’s body for its blood, you begin to quickly understand that The Witch doesn’t seek to pass its supernatural elements off as delusions or psychological problems. It’s a return to an older style of horror filmmaking, reminiscent of The Exorcist and Rosemary’s Baby, where the devil is not a metaphor. He is very real, and he has come for us.

The feature debut of director/writer Robert Eggers, The Witch returns to the earliest days of America, following a Puritan family who has been banished from their settlement due to a theological disagreement the father, William (Ralph Ineson), had with the community. They live on a farm near the woods, subsisting on meager farming and faith.

One day, young Thomasin (Anya Taylor-Joy) is taking care of her baby brother, Sam, when he mysteriously disappears in the blink of an eye. This tragedy tears the family apart — all manner of bizarre evils descend upon the farm and it becomes increasingly clear that faith alone may not be able to stop the terror that has beset them.

To say much more would be telling, and The Witch is a film that needs to be experienced in its full and terrifying whole.

At the most basic level, a horror film needs to be scary, and The Witch is that in spades. Fear is not established through a single jump scare; there are no cheap scares in The Witch.

Rather, it is the oppressive atmosphere of The Witch. It is measured, patient filmmaking, willing to slowly put its shadowy hand over you and let you feel every inch of the fear and tension before putting the knife in with some nightmarish image or terrifying revelation. It’s a film that is scary, because you are seeing something that feels all too real, something forbidden and dark.

Much of that is thanks to the filmmaking craft on display. Top to bottom, everything about this film is real enough to grab you and expressive enough to hypnotize you. Eggers and cinematographer Jarin Blaschke compose every frame like a Hudson River School oil painting. The film is simultaneously inviting and mysterious, as if some darkness is always concealed beneath the surface. The Witch is loaded with absolutely haunting images that are carved out of the authenticity of the setting.

The Witch shows The Revenant what can actually be artistically and narratively done with a harsh, real wilderness setting. Eggers’ decision to film almost solely outdoors, to film only in natural lighting, actually makes The Witch feel real. It makes the creeping evil on display more tactile, as though it’s actually killing and destroying a real family.

Eggers researched letters and writings from the time and infused them — often via direct quotation — into the dialogue of the script. It’s hard to understand at times, but it makes the interactions between the actors and their setting feel authentic and gives a certain removal from the setting that makes the unfolding events all the more bizarre and otherworldly, a tragic Shakespearean quality that underlines the blood and the Devil.

Lesser actors would have had trouble selling “ye olde” dialogue, but The Witch is not a film cursed with lesser actors. It’s an actor’s picture, the six members of the family comprising the overwhelming majority of the screen time. Ineson as William, the father, and Kate Dickie as Katherine, the mother, are perfect push and pull, the two of them selling bafflement and terror in equal measures. The two young actors (Ellie Grainger and Lucas Dawson) playing twins Jonas and Mercy are impressively creepy without ever overselling it, and the work of costume designer, Linda Muir, augments their unsettling “little adult” quality that makes their murmurings about their discussions with he-goat Black Philip particularly unnerving. Harvey Scrimshaw’s Caleb has one of the film’s most disturbing and absolutely incredible sequences, a performance he sells in a way that would be difficult for more experienced actors to achieve.

But it is center of the film and lead Anya Taylor-Joy who deserves immense praise. She turns in the kind of performance that all horror actresses dream of. It’s vulnerable and terrified, powerful and weak all in equal measures. There’s not a false note in the whole of the film, made doubly impressive by the reams of dialogue she’s asked to espouse. With this performance, Anya Taylor-Joy announces herself as one of the next great actresses.

I heap so much praise on this film, because it deserves it and because it’s the only way to convey how truly impressive The Witch is. It’s a film that feels pulled from some other world, some dark artifact found on a shelf in a home that no one has ever lived in. Robert Eggers has tapped into some deep fear of the soul. His characters struggle valiantly to deal with an evil that they don’t truly know.

They think they’ve prepared. The family thinks they understand the evil, but they don’t, and they can’t resist it. It’s a suffocating kind of horror, one where you realize that there is nothing to be done but watch them slip into darkness.

And it’s so real. There are moments in The Witch where you legitimately believe that you’re viewing something truly evil. Eggers’ skill exists in those moments — in creating a film where every detail, every moment of silence and every moment of violence is held just long enough to hypnotize you into thinking that what you see on-screen is happening before your eyes.

It’s the power of film at its best. The experience of capturing the uncapturable. Of showing us evil and leaving us in the theater just a little more disturbed for the experience.