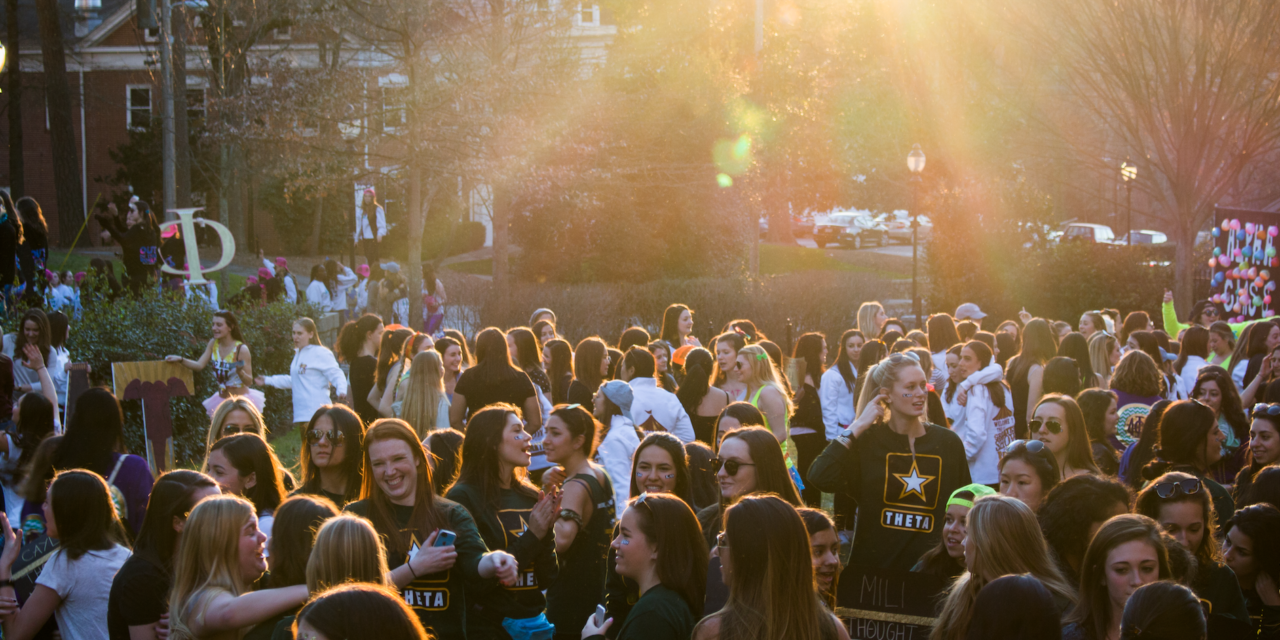 “I didn’t know what to expect, and I was not expecting what happened,” College freshman Samantha Korn said about her recruitment and bid day experience. “Knowing that my new sorority sisters would be waiting for me was surreal.”

This spring, 459 women and 340 men participated in formal sorority and fraternity recruitment. Of those, 313 women received bids to one of Emory’s seven Panhellenic chapters and 230 men were invited to join at least one of the University’s 11 established fraternities.

While the total number of men participating in the Interfraternity Council (IFC) recruitment is on par with that of previous years, Business School senior and IFC President Taylor McNair said that the retention rate of potential new members choosing to accept their bids was significantly lower this year, with only 151 new members across Emory’s thirteen fraternity chapters.

College senior and EPC Vice President of Recruitment Adrian Rabin attributed the decrease in participation to recently implemented EPC programming, which includes more guidance from Pi Chis, sorority women who disaffiliate themselves from their chapters before recruitment to mentor potential new members throughout the process.

Although the Pi Chi program has been used for a few years, the Pi Chis are now trained extensively to help those going through the process with the stresses that can be a part of it. Rabin said that Pi Chis “helped potential members think realistically about the type of commitment involved in joining a sorority and to decide whether this really was something they were ready to do.”

Along with changes to the Pi Chi program, College senior and EPC President Olivia Czufin mentioned that this year, EPC made an intentional attempt “to reduce the frills” of recruitment to ensure that the potential new member decisions are focused on values rather than decorations.

Czufin added that due to the success of these changes, she expects that more changes will be implemented next year.

Rabin also noticed that many women withdrew from EPC recruitment so that they would be eligible to participate in populating Emory’s first chapter of Pi Beta Phi, a new sorority which plans to colonize on campus this February.

Weather complications also affected formal sorority recruitment this year, as EPC had to reschedule two days of rush, thus postponing the entire process by a week, because of the administrative decision that EPC should not hold University-sanctioned events on days when the University is officially closed.

“It was stressful,” Emory Director of the Office of Sorority and Fraternity Life Marlon Gibson said. “Stressful for EPC, stressful for advisors, stressful for women in the chapters, especially those that had activities planned for last Sunday.”

Because bid day was pushed back, potential new members had to wait an extra week to find out their ultimate placements. “The waiting was so intense this year,” College freshman Rebecca Bowles said. However, she added, “bid day was a tiring whirlwind of excitement and introductions, but well worth the stress and sore throats that recruitment brought with it.”

Additionally, Gibson said that some sorority chapters had to attempt to get funding back for events that they had planned for bid day before the date got moved.

Last year, IFC introduced a significant logistical difference in its recruitment process: formal spring recruitment was to be divided into two halves. This year, the first round of recruitment took place over the course of two nights in November and the final rounds ended this past weekend.

This change was implemented to increase recruitment participation numbers and to expose potential new members to more chapters for a longer period of time, according to McNair.

“The hope is that both rushees and chapters themselves have the opportunity to meet people during the November rounds and spend more of the semester getting to know each other,” he wrote in an email to the Wheel. He said that this is a positive development, because most new members only interacted with fraternity brothers during rush week, and were only given a few days to receive a bid in the past.

McNair said he considers the change to be effective because an additional 60 students signed up for IFC recruitment between November and January this year.

“We promoted them a lot this year, so I think that paid off,” he said. “We worked hard to make sure people knew who they were.”

As a result of fewer bids and fewer housed fraternities, fewer men will join the Greek system than normally do. McNair said that the main improvements IFC needs to focus on include marketing Greek Life to the general Emory population and promoting the new split recruitment scheduling. He also hopes to continue to work with individual chapters to improve their retention rates and to increase the number of overall bids given out.

She said that the process is highly individualistic. Over the course of the four days of formal recruitment, chapters and potential new members are matched up in rounds of a mutual selection process. “We always encourage each potential new member to maximize their options and keep their minds open,” Czufin wrote in an email to the Wheel. “We find that, while women enter the process with a specific chapter in mind, they often find their place in a house they did not expect to like.”

Bowles agreed. While she did not intend to join a sorority when she came to Emory, she decided to give it a chance, and said she was swayed by the intimacy of the recruitment experience.

“It was nerve-racking to talk with so many different people, but through the days I got to have some really great conversations with women who really changed how I viewed Greek life,” she said.

Nonetheless, some students did not participate in recruitment because they found fault in the very nature of the process. College freshman Laura Briggs decided not to rush because she believes that the process is rooted in the unfounded principle that it is possible to get to know a person in just a few minutes, she wrote in an email to the Wheel.

“Prospective members of Greek organizations who are nervous and exhausted during rush are herded from one superficial conversation to the next while each member judges their character,” Briggs wrote. “It encourages an unhealthy level of conformity and superficiality.”

Furthermore, some students reported that they received bids through the online portal used throughout the IFC recruitment process, when it had not been intended for them to receive bids from the respective fraternities. “I was so excited to get a bid. It was a dream of mine,” said a freshman who participated in IFC recruitment. “I was heartbroken.”

At least a few such cases have been confirmed.

“Guys who came to the Thursday round showed up as if they were to receive a bid on Friday,” Zeta Beta Tau Chapter President and College sophomore Daniel Elchediak said.

Alpha Tau Omega Chapter President and College junior Hugh McGlade expressed his concern over the homogeneity of the IFC fraternities. “If the IFC hopes to be a meaningful and worthwhile part of the Emory community, its leaders and its members must figure out how to make the groups and spaces more welcoming, safe and inclusive,” he wrote in an email to the Wheel.

However, Emory’s Greek system has been taking active steps towards addressing this problem, according to Czufin. “This is … an area where we are constantly evolving, improving and growing, demonstrated by our willingness to openly attend and take feedback from the meeting Feminists in Action hosted last year about the [Wheel editorial: ‘Sorority recruitment disempowers women’],” she wrote.

While it was difficult to derive any tangibles from the theoretical conversation, “No process is perfect, but we strive to be as inclusive, open, and flexible as possible,” Czufin wrote.