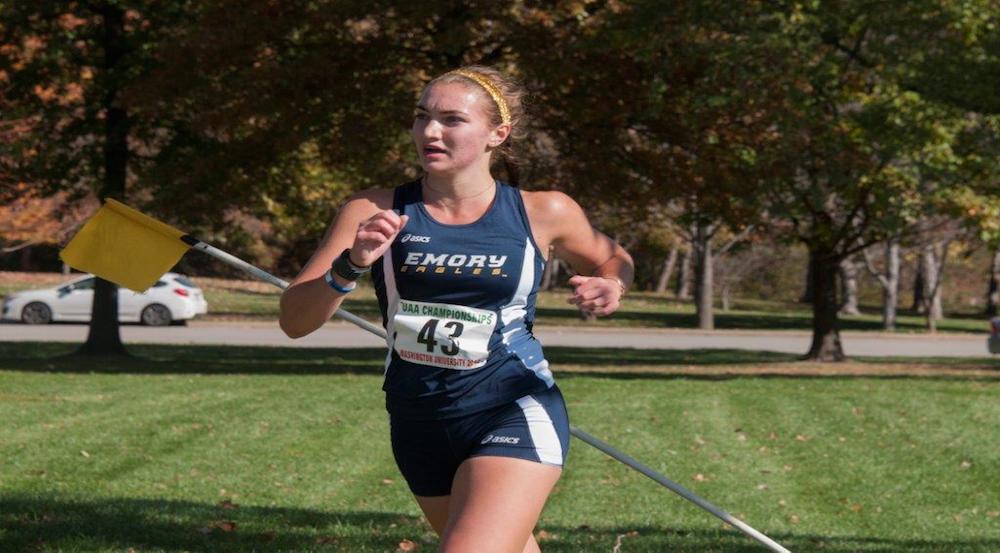 Under the ominous, drizzling clouds in Oxford, Ala. this past Saturday, the Emory men’s and women’s cross country teams competed in the Jacksonville State University Foothills Invitational at the Oxford Lake and Recreation Center. Both the men’s and women’s teams dominated, placing first in their respective races. The results push both squads into the NCAA Southeast Region No. 1 spots.

“We were a little worried about the weather but we were actually pretty fortunate,” Head Coach John Curtin said. “The rain was light in Oxford all morning and the course held up very well.”

The women’s team dominated the 5K, posting the top-five overall scorers and blowing away the competition with best-possible 15 points; runner-up Birmingham-Southern College (Ala.) finished with 72 points. Senior Elise Viox led all 60 runners with a time of 18:15; the fastest 5K ever ran by an Eagle on the course, according to Curtin. Meanwhile, sophomore Gabrielle Stravach (18:38), senior Aileen Rivell (18:42), sophomore Megan Waples (18:45) and freshman Clare Ubersax (18:47) rounded out Emory’s scoring.

“It was the best team effort by far for the women,” Curtin said. “We had six girls break 19:00 and we have never had more than three do that in previous years.”

Outside of the obvious dominance of Viox, Curtin was especially impressed by the performance of Ubersax, who he said beat her personal record by over a minute.

“Clare Ubersax broke into our top five scorers for the first time,” he said. “Honestly, I wasn’t surprised by her performance. That kid is just scratching the surface of her ability.”

The men’s team led the 8K race’s five-team field with 16 points, 30 better than runner-up Birmingham-Southern (Ala.).Spring Hill College (Ala.), Tuskegee University (Ala.) and Miles College (Ala.) followed in third, fourth and fifth, respectively. The Eagles led throughout the race, taking the top four finishes.

Senior Lukas Mees posted a time of 25:35, finishing in first place overall for the second straight meet. Junior Grant Murphy, who Curtin said was coming off a foot injury, finished in second, with a time of 26:03. Junior Michael McBane posted a season-best 26:05 for third place overall and junior Michael Sisario finished with a personal-best 26:06 to earn a fourth place finish. Freshman Bennett Shaw rounded out the scoring, finishing sixth overall with a time of 26:27.

“Our guys had a tough training week so I was pleasantly surprised with the quality of their performances,” Curtin said. “Lukas Mees has been a rock for us all year … We have a solid five and I think they are going to keep getting better.”

Both teams will travel to the University of Wisconsin at Oshkosh for the Pre-National Invitational Oct. 17.

Curtain said that the Eagles will be at a good place going into their first national meet of the season.

“Top teams from all over the country will be there, so we need to get ready and be at our best.”