As another Academy Award ceremony approaches, the Wheel reflects on the films nominated for the Best Picture category. Since the rule change allowing up to 10 films instead of five to be nominated for best picture, the Academy has nominated the maximum amount of films almost every time. Since it is a good public relations move for the film industry to promote as many films as it possibly can, it makes sense. However, as one might imagine, the quality seems to dip after the best five nominated films.

Fortunately, I can say from a critic’s perspective this year has altogether gone the opposite way. The current crop of best films are, one through 10, quite extraordinary in their own right. So extraordinary, in fact, that it is astonishing to hear some say the film industry is slowly dying thanks to the invention of illegal downloads and Internet streaming. A whole article could be written about this topic, but for now, onto the actual films themselves.

The five best of the best picture nominees:

As I previously wrote in my review of “Lincoln,” Daniel Day-Lewis is the cornerstone of this film. I would even be so bold as to say that he might just be the greatest actor of his time (for other references, see “There Will be Blood” and “Gangs of New York”). With such a partner in director Steven Spielberg (“War Horse”), it is not surprising that this film had an excellent box office release ($160 million). Tony Kushner’s (“Munich”) script is equally as admirable, and the combination of all three people’s contributions brings the audience into the film as we experience the strong will and wit of our 16th President of the United States. But the most important thing I believe this film offers is something that goes beyond the theater. The concept of race relations, which has not really been a major topic in America since the 1970s, sprang back into life after the release of this film. While I don’t believe “Lincoln” will win Best Picture, I do think that bringing back something as important as the topic of race deserves an honor in and of itself.

Many thought that the original book about a boy adrift at sea with only a Bengal tiger for company written by Yann Martel could not be turned into a film, but when you put a director as influential as Ang Lee behind the camera, it is easy to see why this film has been so well-received. Lee transports us to a mesmerizing world where the bond between man and beast becomes skewed. Although digitally crafted, the tiger in this film seems real enough to terrify even the strongest member of the audience and our ride with the protagonist Pi through a world that is both cruel and beautiful is an enchanting experience. Unfortunately, I don’t think Life of Pi will win, but it will get at least one award in best visual effects (for anyone in an Oscar pool this is a sure thing), and could even pull out best-adapted screenplay.

Although the title of this film is obscure, director and star Ben Affleck (“The Town”) leaves nothing to the imagination of what truly happened during the 1979 Iranian Hostage crisis. What could possibly be the most intense and nail-biting film of the best picture nominees, thanks to an extreme but neat script by Chris Terrio, we follow Affleck’s protagonist through the process of creating a film company, developing a movie, and finally (in case you didn’t know your 1970s American history) saving the lives of Americans trapped in the heart of Tehran. Although Affleck was snubbed for Best Director, he did spark a conversation that I have been particularly fond of for the past month. It has become a notion that the adult film is extinct and that major studios are only interested in catering to the shrieking adolescent fans of movies like “Twilight.” If this is true, then movies like “Argo” should not exist, but fortunately for this critic and many people still out there, these types of movies are still being made. Although Argo could potentially win Best Picture, it will not. Best Picture and Best Director usually go hand-in-hand; unfortunately for Mr. Affleck, he was not nominated for Best Director. However, he did win the Golden Globe for Best Director, so that’s a bit of a consolation prize.

Question: What could possibly be better than a half Blaxploitation, half spaghetti western?

Which is exactly why director Quentin Tarantino decided to make “Django Unchained.” There have been some critiques of this movie: mainly, too much violence and an overuse of racial slurs. What these critics don’t seem to get, however, is that this is exactly what Tarantino’s ludicrous script was going for. As a director, Tarantino tries to rile the audience up, and this film is a prime example of the techniques he uses to achieve this.

Another excellent ingredient to a Tarantino film is the terrific display of acting by his stars. Jamie Foxx (“tktk”) as Django puts on a courageous yet vulnerable costume of a slave-turned-bounty-hunter and throughout the film has the audience cheering him on.

Christoph Waltz (“TKTK”) does a commendable job as Django’s mentor, but to be honest, there were too many similarities between his role in this film and his performance in “Inglourious Bastards,” which made the role seem unoriginal and less interesting.

The best character in this film, however, is by far Leonardo DiCaprio (“TKTK”) as a white plantation owner, who amazingly was snubbed by the Academy. To quote a famous sports announcer: “those officials blew the call.” Django might not win best film, but it could very well steal the best original screenplay award from Wes Anderson’s “Moonrise Kingdom.”

Beasts of the Southern Wild

Although this film might not be the most commercial – it’s the second-lowest box office score of the films nominated for best picture – it is by far this critic’s favorite movie of the year. “Beasts of the Southern Wild” is a powerful, magical tale about a Louisiana community outside the circle of the giant levees that protect the city of New Orleans. A sensational script written by Benh Zeitlin and Lucy Alibar (“TKTK”) follows a young girl named Hushpuppy played by a strong-willed QuvenzhanÃ© Wallis, who earned a deserving Best Actress nomination. The most amazing and exceptional quality of this film is its ability to shift from fantasy into reality with unnoticeable transition as Hushpuppy creates a world for herself that escapes the horrors of the impending storm heading towards her beloved community. This film is out for release, and anyone with a pure joy for film should watch “Beasts of the Southern Wild.” In my opinion, this film gets the Best Picture award and its newcomer yet sharp director in Benh Zeitlen gets the director award. 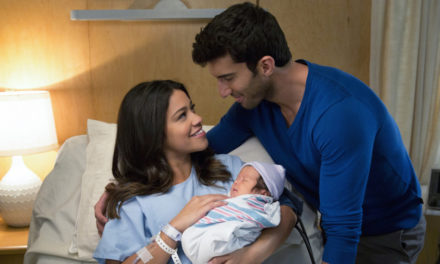 ‘Jane the Virgin’: The Comedy-Drama You Can’t Live Without