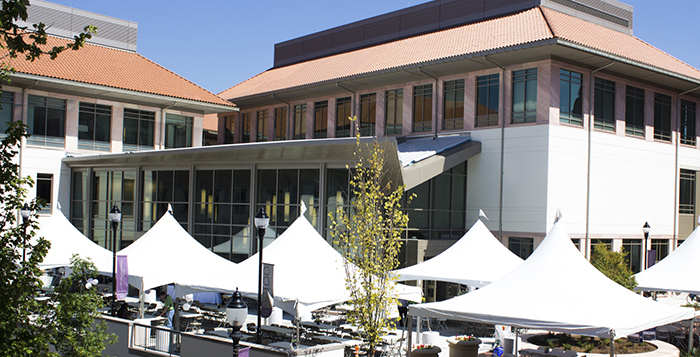 The Pitts Theology Library relocated from Emory’s oldest building – constructed in 1915 – to a brand new site complete with group study rooms, a lecture hall, an exhibit and high-density shelving for the library’s 610,000 volumes, according to library administrators.

The new 63,000-square-foot center sits between Cannon Chapel and the Rita Anne Rollins Building. The new library, the second phase of a $58.5 million construction project, took about two years to complete, but provides 29,500 more square feet of space than the previous building, along with other benefits.

“In the hundred years of the Candler School of Theology, our students have never had a place for their own group study, so this is a big deal for them,” said Patrick Graham, the Director of the Pitts Theology Library.

Graham added that he hopes to attract theology students who generally use Woodruff Library or their residences to study.

“We’re anticipating a lot of activity here,” he said.

The old library, located directly across the quadrangle from Carlos Hall, posed a number of problems, Graham noted.

The first building on the Atlanta campus, though renovated in 1975, had wall and roof leakage, inadequate temperature control, poor lighting and no group study areas.

“It was really hard to see in the other building,” said College senior Amber Green, who has been working at Pitts since her sophomore year. “I like this one a lot better – it’s really bright.”

Brenda Bailey-Hainer, the executive director of the American Theological Library Association, said poor lighting is “the one complaint I usually hear about libraries.”

The seven small group study rooms and two large rooms in the new library, for example, are each equipped with a whiteboard and a flat screen television monitor.
In addition, the new library’s LED-lit exhibit room, according to Graham, will soon be outfitted with iPad minis for digital tours. The exhibit room, which Graham said will host three to four exhibitions annually, sits next to a 50-seat lecture hall for visiting speakers and other events.

The tables on the library’s second floor were built extra-wide to accommodate the often non-digital study materials used by theology students.

“We’re hopeful that it’ll help attract students to Candler,” Graham said. “We’re already getting requests from other academic divisions at Emory to use this wonderful space.”

Green said she thinks the new library has already drawn future theology students from the College. Bailey-Hainer said she sees the potential to attract prospective graduate students as well.

“Whenever you hear about a new library somewhere, students see that that school values its library,” Bailey-Hainer said.

She added that along with the library’s online presence, which Pitts continues to build, the construction of a brand new library is the first impression prospective students will get when eyeing potential graduate theology schools.
“It’s definitely one of the best theology libraries in the U.S.,” she said. “There’s really an excellent group of people working there, a good collection and they’re digitizing the materials.”

As for how he would rank Pitts nationally, Graham said his library “is definitely in the top three.”

Construction workers at the building that housed Pitts’ collection for nearly a century appeared to be in the process of taking apart its internal structure – the building’s floors were covered with bolts and dismantled shelves. The shelves still standing had been gutted of their complete volumes.

“It was a wonderful location – we were happy to have it,” Graham said of the old library, adding that neither he nor the rest of his colleagues know what will happen to the building in the near future.

Tours at the new location of what some call one of America’s top theological libraries began on its opening day, Aug. 5, and will continue through the fall. Green said she has already signed up for one.